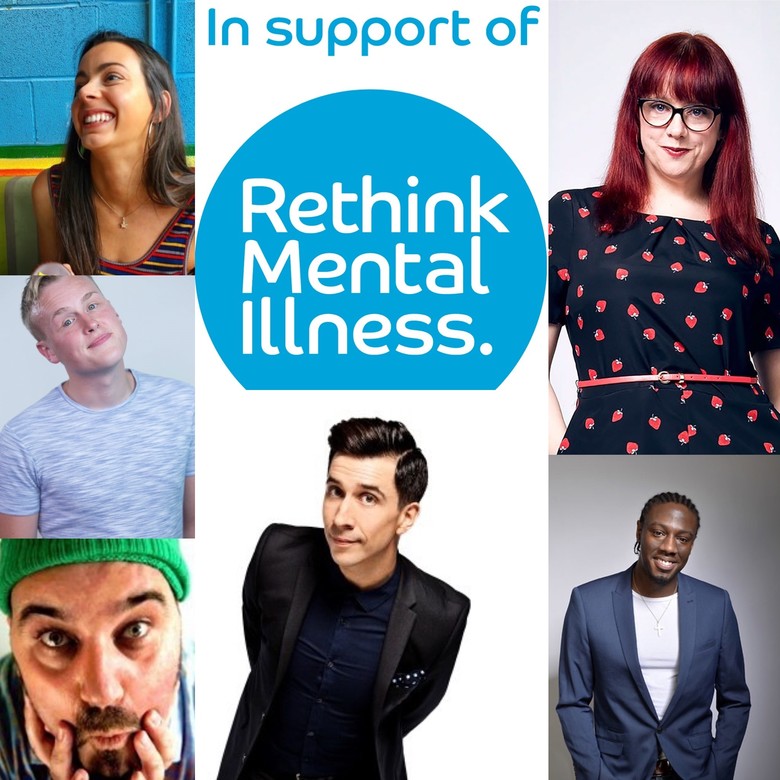 Laugh your Way Through Lockdown with Top Comedy presented by Collywobblers Comedy in aid of Rethink Mental Illness.

Book Advanced Tickets £15 (Per ticket ) for Online Tickets via Zoom

The event is EXTREMELY limited, with only 100 tickets available. Previous sold out quickly so snap up tickets to avoid disappointment

Rethink Comedy returns once again , this time online for 2021 via Zoom, with a brilliant lineup of live comedy headlined by our friend and ambassador the legendary Russell Kane and friends. It will be a night of laughs, jokes and raising awareness of mental health. Funds go to Rethink Mental Illness to support people living with mental illness who need our help.

Come Join us for a brilliant evening of live comedy beamed directly to you via Zoom, grab yourself a drink ( s) and and keep the good vibes flowing with awesome comedians.

Please laugh loud as the comedians need to feel your love n laughter and help raise money for a good cause.

Techie bits n bobs : Once you buy a ticket, please set up a free zoom account ( its easy peasy- https://zoom.us)

Secret Zoom link will be sent at 7.30pm on Weds 17th Feb in good time so you can attend the online gig.

For information on reservations please contact sionjamescomedy@me.com or please text 07734805817

Please do not share the link as attendees are limited numbers and we want to make this a bespoke live experience for you all.

The Show starts 9pm.
We'd advise logging on to Zoom at around 8.45pm or earlier so you can tweak any tech bits and can grab a drink and chill before the fun starts
The online comedy gig is a new experience for most of us , as you can imagine there will be unpredictable tech issues just like a live comedy gig! Thanks for your support and love 'n laughter and stay safe and healthy

Russell Kane
Multi-award-winning comedian, presenter, actor, author and scriptwriter Russell Kane is best known for the BBC Sounds podcast, Evil Genius which has become a flagship show and was the best performing original podcast on the platform.
As seen on BBC1's Live At Apollo, BBC3's Unzipped, ITV2's Celebrity Juice and I'm A Celebrity Get Me Out of Here! Now! 'A seriously good comedian' (The Times) 'Russell Kane delivers magic in spades' (The Scotsman) A masterclass in online zoom comedy

Nathan Caton
Nathan's award-winning combination of personal and topical anecdotes has led to appearances on Live at the Apollo, Mock The Week, Don't Hate The Playaz, Channel 4's Comedy Gala, Russell Howard's Good News and his own series, Gran Jury. Nathan is also a well-known voice on BBC Radio 4 with appearances on The Now Show, The News Quiz and his sitcom, Can't Tell Nathan Caton Nothing. A huge football fan, Nathan has also appeared several times on the BBC Premier League Show and released his own podcast, Nathan Caton's Football Forum.

Angela Barnes
After a career in health and social care, Angela Barnes took the plunge and embarked on her life-long dream to be a comedian. Within just a couple of years she had won the BBC New Comedy Award in 2011 and has now gone on to star in BBC Two’s Mock The Week, Live At The Apollo and Hypothetical on Dave. As well as becoming a regular on BBC Radio 4 having featured on The Now Show and The News Quiz, Angela took on the role of host on BBC Radio 4 Extra’s Newsjack in 2017. Angela’s hit series You Can’t Take It With You returned for a second series in 2019 in the coveted 6:30 pm comedy slot on BBC Radio 4.

Josh Jones
Josh is fast becoming one of the best young acts on the circuit.Nominated for the Hackney Empire New Act of the Year 2019 and one of Chortle’s Ones to Watch in 2019, and he continues to wow audiences up and down the country.
‘'Engaging personality, and a back-story that should keep him in routines for years to come'’Chortle

Acts shown are correct at time of going to press. Mgmt reserve the right to change the line-up without notice

For information on reservations please contact sionjamescomedy@me.com or please text 07734805817
Please do not share the link as attendees are limited numbers and we want to make this a bespoke live experience for you all.

Read more about Rethink Mental Illness here www.rethink.org Acts shown are correct at time of going to press. Mgmt reserve the right to change the line-up without notice

Even virtually, this event was fab! Lots of really good comedians and it was such a refreshing change whilst in lockdown! Thanks!

All for charity so you can't put a price on that. My sofa - top venue. The performers did a cracking job with the challenges of no human audience and speaking to a screen but I giggled A LOT and felt just as involved as in a pre covid show. Thanks team for lifting our lockdown.

Can’t wait for the ‘venue’ to be back on stage. Such a great show with so many laugh out loud moments! Thank you to all who made it a great night’s entertainment.

It was my first experience of a comedy night via zoom. Loved it, so much fun. Great atmosphere. All great comedians with different styles that complimented each other. Great to know that we were raising money for a great charity just by buying and ticket and watching the show

A hilarious night with great atmosphere even over Zoom, didn’t think it would be possible! Sadly some punchlines were lost from people not turning down their microphones but other than that really fun!