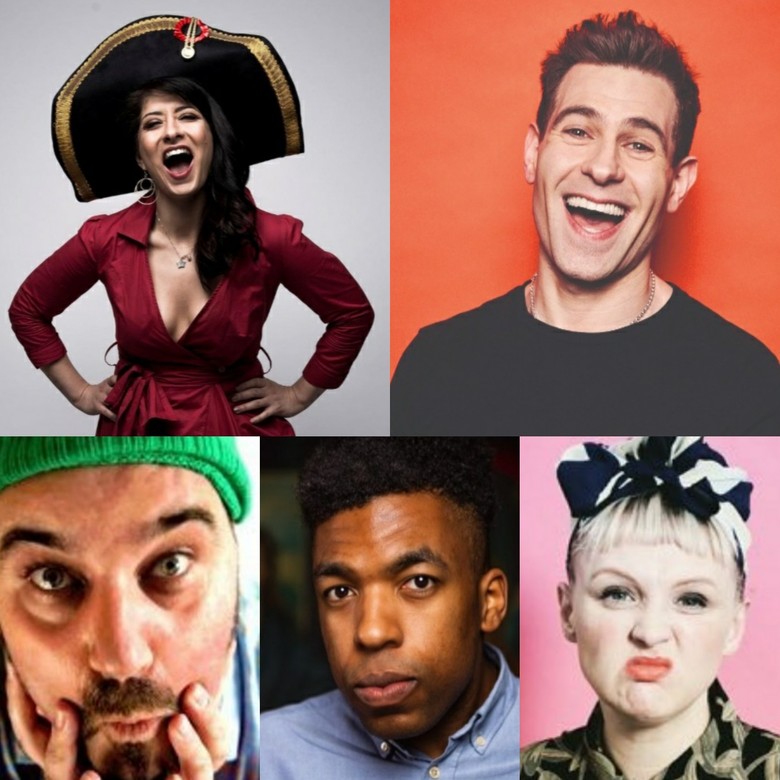 Saturday 30th January 2021
7.45pm til Midnight
Nice N' Spiky Comedy & Collywobblers Comedy Live Virtual PartywithSimon Brodkin, Shappi Khorshandi, Toussaint Douglass, Hatty Ashdown, Marky Dawson, Tony Ukulele & Host Sion James.
Following the success of Nice N' Spiky & Collywobblers Comedy Amazing New Year's Eve Comedy Party we're back with a big end of January Saturday night show full of laughter & music.
Live and interactive virtual comedy show complete with a visible and audible audience (if you're shy you can switch your camera off!).
You can be anywhere in the country (or even the world!) and join us virtually. All you need is WiFi.

*****PRIVATE BOOTHS NOW SOLD OUT*****
There ARE a handful of Tickets for Live Comedy Show & Aftershow Disco ( Pls Login 8.45pm for 9pm Show) Thanks Lovely Comedy Fans!!!
For group bookings of four people or more, bring your friends all together across the country ( or world!) for a pre - comedy drink and chat in our 'private booths' with pop-in live songs from incredible piano man Marky Dawson and Ukelele player Tony Ukulele.
All for only £10 per person - book now to avoid disappointment!
The best Zoom call you'll have this year!!!
Simon Brodkin (BBC's Live At The Apollo, Lee Nelson's Well Good Show/ C4's Britain's Greatest Hoaxer),Shappi Khorsandi ( I'm A Celebrity Get Me Out Of Here, Friday Night With Jonathan Ross,Live At The Apollo, Have I Got News For You)Hatty Ashdown (Comedy Central's Give Out Girls),Toussaint Douglass( BBC's Stand Up For Live Comedy)and hosted by "Utterly charming" (Time Out London) Siôn James.

Simon Brodkin
Star of Live At The Apollo (aka Lee Nelson AKA the man, the legend, who gave Theresa May her P45)
After three hugely successful BBC series as Lee Nelson, multiple sell-out tours and world-famous stunts on Sepp Blatter, Donald Trump, Kanye West and Theresa May, the award-winning, critically-acclaimed comedian unveils his funniest character yet… himself!
Starred multiple times on BBC One’s 'Live At The Apollo', both as guest and host.
'Hilarious' List 'Genius' Independent. 'Get him out!' Donald Trump.
“There aren’t many better comedians to turn to” The Daily Telegraph
“A prodigious talent” The Times
Shappi Khorsandi
Stand Up Comedian, Author, Icon. As seen all across your television on shows including I'm A Celebrity Get Me Out Of Here, Live At The Apollo, Friday Night with Jonathan Ross, 8 Out Of 10 Cats and Have I Got News For You, and heard on BBC Radio 4's Loose Ends, The News Quiz, Just A Minute.
'She has plenty to say, and says it with pointedness and potency.' The Guardian
'Seriously funny and surprisingly filthy' The New Statesman

Hatty Ashdown
Creator and Co Writer of the Comedy Central Sitcom 'Give Out Girls'. Hatty appeared in BBC Radio 4's Romance and Adventure and is presenter of Funny Mummies Radio Show & Podcast on Soho Radio. Hatty also hosts and comperes Screaming With Laughter Comedy Clubs at venues such as Underbelly, Southbank Centre, The Bedford and Stanley Arts. ‘Wonderfully inventive, consistently funny’ Time Out

MC Siôn James"Utterly charming ... Lovable giant' Time Out London
"great host, his shows always have a friendly, fun atmosphere and are a welcome distraction from life in 2020!!" Virtual Audience Member
With special live music guests Marky Dawson - our pocket sized charismatic piano man & Tony Ukulele who will pop in to the pre-show private booths for groups and take song requests.

Acts shown are correct at time of going to press, in the unlikely event that an artist needs to cancel, we reserve the right to change the line-up without notice.
Advanced Tickets Available Online
Each Ticket is £10 + booking fee per person.

After you've bought your ticket you'll be emailed a private closed Zoom link on the day of the event. All you need is an internet connection plus a computer, laptop, tablet or phone to access the link.

Group Reservations
If you're buying four or more tickets for a group please email nicenspiky@gmail.comas soon as possible to reserve your virtual 'private room' for 7.45pm to 8.45pm with pop in live music before the comedy starts. Please note there are a very limited number of booths on sale and they'll be available on a first come first serve basis.

Please note this virtual event is limited in numbers and only those who have bought tickets will be admitted to the show, so please do not forward on the link as it won't work for others.

Overall, a really good comedy experience. It must be so hard for comedians to perform under such restictions but the individual acts and the overall atmosphere was as good as it could possibly be and we had a fantastically funny evening. Will definitely book again and look forward to seeking out many of these acts when comedy clubs can reopen. Well done to all involved.

Brilliant night of comedy to brighten a dull January