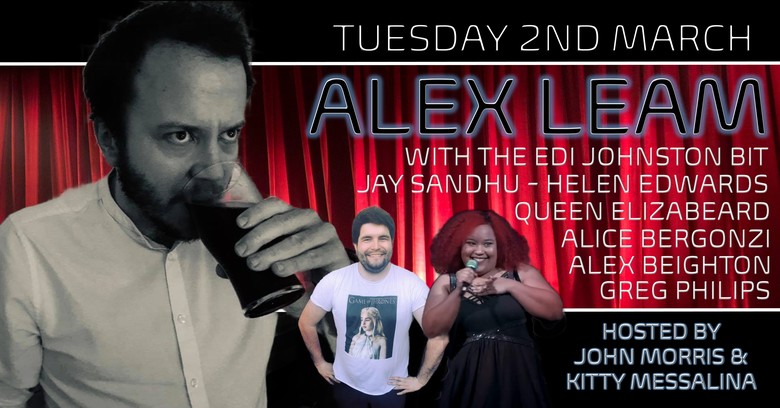 Support live comedy and reserve your tickets via Eventbrite. Tickets are free - donations to performers!
The event will be hosted in a (closed) Zoom event - we ask that audience members keep their microphones unmuted and the cameras on where possible so the performers receive live laughter, applause and encouragement.
Our first fantastic line-up is as follows:
HEADLINE ACT: ALEX LEAM
Before he became a stand-up, Alex Leam's first showbiz career was as a mobile DJ (that couldn't drive). He dreamed of Ibiza, but ended up doing weddings and pub quizzes.
Throughout lockdown, Alex has been hosting regular Awkward Question Time and Improv Provocateur shows on YouTube, and when there isn’t a pandemic interfering with live events, he hosts regular stand-up nights with Provocateur Comedy in Derby.
Follow Alex Leam on Social Media: Twitter - @alexleam Facebook - @alexleamstandup and YouTube - Youtube.com/alexleam
JAY SANDHU
Nottingham-based Jay Sandhu is a comedian, writer and poet. Punchy, informative and witty, his poetry and comedy focuses on race and culture. Jay is also part of the GOBS spoken word collective and has performed at Rooftop Comedy and at The Bradford Fringe. He has also headlined Poetry Scum and has recently had his poetry featured on BBC Radio Nottingham.
Jay also has a (covid-pending) feature comedy show coming up at Nottingham comedy festival. You can keep up to date with everything he is doing at Sandhuwrites.co.uk
Social Media Links: @Sandhuwrites (everywhere) and @jaychatspodcast
THE EDI JOHNSTON BIT
Ukulele Musical Comedian from Nottingham, playing songs & skits about life as a ginger, hiphop loving, sport watching, comfortable shoe wearing Parent. 2019 Slam Cabaret champion (with the smallest trophy in the world proudly displayed in his living room) The EJB’s Victoria Wood/Flight of the Conchords inspired songs touch on subjects like Conkers, Ninjas, Dictators, Tea & Cake.
@edijohnstonbit on Twitter, Instagram & Facebook @edi_johnston on YouTube www.edijohnstonbit.com
ALEX BEIGHTON
Comedian Alex Beighton was birthed out of the Soho Theatre Stand Up Comedy Labs kicking, screaming and covered in amniotic fluid. It was there she learnt how to make gay things funny and funny things gay.
You can keep up with Alex on Instagram: @alexwbeighton
HELEN EDWARDS
Helen is a Brummie who moved to the North East twelve years ago and forgot to go home.
She noticed when she performed on her music degree that audiences seemed more interested in her banter between songs than the actual songs, so she decided to make a feature of it.
She just turned 40 and is unsure if she should be worried about the unnatural amount of pleasure she derives from eating teddy-bear-shaped crisps.
Follow Helen on Facebook: @helenedwardscomedy
QUEEN ELIZABEARD
A comedic look at the Royal Family and politics through the eyes of our bearded Queen.
You can find @QueenElizabeard across social media.
GREG PHILLIPS
Greg describes his comedic style as “high energy, happy but pissed off/frustrated”. A newcomer to stand-up, you can follow him on Facebook: @GregPhilipsComedy
ALICE BERGONZI
Another newcomer to stand-up, Alice describes her comedic style as “slightly self-deprecating rants on life, basically.” We look forward to welcoming her to the (virtual) stage!
AND YOUR HOSTS:
KITTY MESSALINA
Kitty Messalina is a triple threat - a queer woman of colour. Her unique perspectives on prejudice, promiscuity and polyamory quickly earned her a nomination as a Finalist for the NCF New Act of the Year Award 2019. With anecdotes about political foreplay, accidental threesomes and lesbian sheep, delivered with "an honesty and vivacity" (Notts Comedy Review), she’s excited to kick off this platform for new acts and new material.
Find her on Facebook: Facebook.com/kitty.messalina/
JOHN MORRIS
John Morris is absolutely no threat - a straight white man. John’s an improviser and a comedian from Nottingham. He also hosts the task-based panel show ‘Larklord’ for MissImp: Improv Comedy Nottingham. He’s also relatively excited about Late Stage Comedy, though he wrote this after designing all the posters, so who knows?
Follow John on Twitter @johnjamesmorris