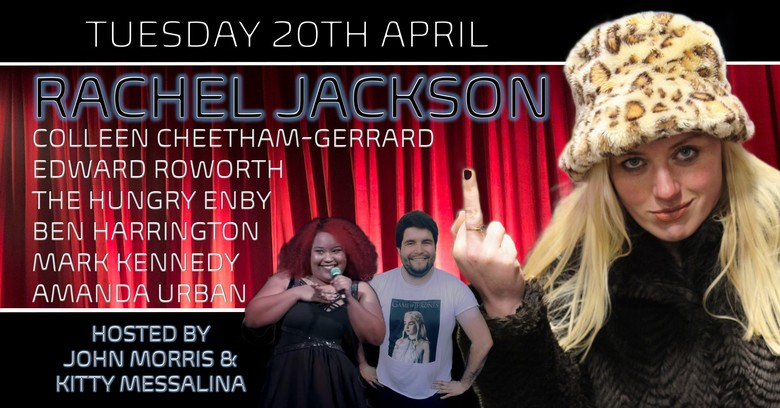 Our fantastic line-up on 20th April is as follows:

Rachel is an award-winning Scottish actress and comedian who recently won the Herald Scottish Culture Award ‘One to Watch’ prize and trained at Rose Bruford.

She plays Wendy in the recently released feature film 'Beats' from Ken Loach's production company, with executive producer Steven Soderbergh. 'Beats' was part of 'The Great 8' which was shown at a private screening at Cannes. She also played Donna in Karen Gillan's directorial debut 'The Party's Just beginning' which went to TriBeCa Film Festival in NYC as well as the Glasgow International Film Festival, and was nominated for best feature film at the Scottish Baftas.

She has had roles in TV Shows such as 'Outlander' (Starz) ‘Still Game’ (BBC One) 'Two Doors Down' (BBC Two) Scot Squad (BBC One) and ‘The State Of It’ (BBC Scotland). She also wrote and starred in a 6 part mini series for BBC Three called 'Bunny Boiler', as well as a show of the same title at the Edinburgh Fringe which did very well critically.

Colleen Cheetham-Gerrard, despite the name, is not a columnist for the Daily Telegraph. She's a stand-up, professional speaker and geek based in London in exile from her beloved north-west England. Conversational, witty & only periodically fuming about life.

A spectre is haunting Europe - the spectre of Edward Roworth. (Edward Roworth is a prop-based surreal comedian.)

Amanda Urban is a farm raised German country bumpkin. She loves big cities because potatoes don't grow on concrete. Commenting on life as a German woman in her 30s, garnished by her experience growing up on an organic farm, Amanda brings observational material about her family to the stage.

Ben's a middle aged man exploring the aging process and how his body is not quite what it used to be.

Mark is new to stand-up and describes himself as a “deadpan joke writer”.

The Hungry Enby is a stand-up that likes sitting down, to talk about autism, transness, gender and all the "non complicated" stuff. Or at least they would be if they weren't thinking about food and actually read their set...

Kitty Messalina is a triple threat - a queer woman of colour. Her unique perspectives on prejudice, promiscuity and polyamory quickly earned her a nomination as a Finalist for the NCF New Act of the Year Award 2019. With anecdotes about political foreplay, accidental threesomes and lesbian sheep, delivered with "an honesty and vivacity" (Notts Comedy Review), she’s excited to kick off this platform for new acts and new material.

John Morris is absolutely no threat - a straight white man. John’s an improviser and a comedian from Nottingham. He also hosts the task-based panel show ‘Larklord’ for MissImp: Improv Comedy Nottingham. He’s also relatively excited about Late Stage Comedy, though he wrote this after designing all the posters, so who knows?

Pay What You Want

Pay What You Want Ticket to help support the show. Please donate as much as your are comfortable paying. Money is split between the acts.