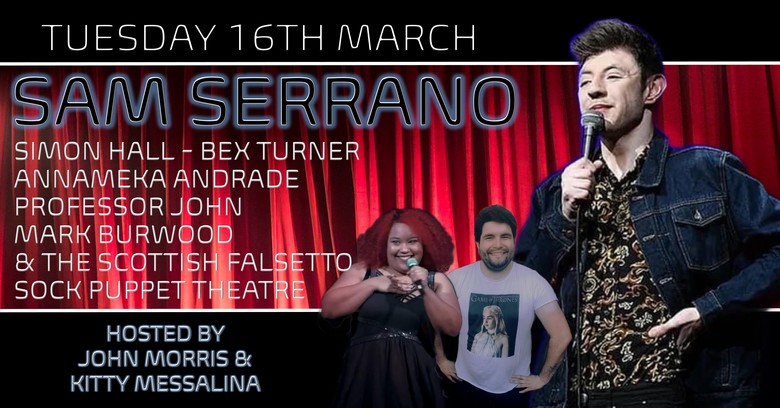 Our fantastic line-up on 16th March is as follows:

HEADLINE ACT: SAM SERRANO
Sam Serrano brings a trademark style of humour which is equally dark and self deprecating. They have “killer lines” (Chortle) which prove they “put the X in X Factor” (York Press) and are “on the verge of an applauses break throughout the whole of their set” (Notts Comedy) making them a “game changer of an act” (Concept Comedy)
Follow them on social media: Facebook - Sam Serrano Comedian, Instagram - Samserranoham, Twitter - Samserranoham, TikTok - Serrano Comedy, YouTube - Serrano

BEX TURNER
Bex is a high energy, surreal stand-up comedienne of 7 years who adds a surreal edge to the topics she explores. Also she includes celebrity impressions in her sets, the top one being Su Pollard from Hidey Hi and more recently Joe Lycett.
“Charming and hilarious love child of Tommy Cooper, Eddie Izzard and Victoria Wood”
Sajeela Kershi (Comedienne and host of Comedy Cottage and The Immigrant Diaries).
“Rebekka Turner, if her comedy seems frenetic that’s because it is. Fearlessly funny, gorgeously unhinged and imaginative, you will not get bored watching Rebekka” (Funny Women).
Follow her on Instagram - @bexturnercomedy and Twitter - @BexTurnerComedy

ANNAMEKA ANDRADE
Annameka is a female immigrant, living the London life, sharing her unique point of view!
Follow her at @annamekaandrade and her website www.annamekaandrade.com

MARK BURKWOOD
Mark is an Autistic comic who takes stereotypes about Autism and turns them on their head.
Follow him on Twitter - @mbcomedian1, Insta - @markburkwood and TikTok - @markburkwood

PROFESSOR JOHN
Professor John is ageing, pedantic, confused and surprisingly crude for a learned gentleman. He steps out of his academic ivory tower to give you the benefit of his 60+ years’ wisdom; at least, that's what he calls it.

SIMON HALL
Bizarre observations of the modern world with classic jokes thrown in for good measure. He doesn’t want to redefine comedy, just do it really well.
SimonSaysStandUp on Facebook and Simon Hall or the Twenty Seven Minute Comedy Hour on YouTube

KITTY MESSALINA
Kitty Messalina is a triple threat - a queer woman of colour. Her unique perspectives on prejudice, promiscuity and polyamory quickly earned her a nomination as a Finalist for the NCF New Act of the Year Award 2019. With anecdotes about political foreplay, accidental threesomes and lesbian sheep, delivered with "an honesty and vivacity" (Notts Comedy Review), she’s excited to kick off this platform for new acts and new material.
Find her on Facebook: Facebook.com/kitty.messalina/

JOHN MORRIS
John Morris is absolutely no threat - a straight white man. John’s an improviser and a comedian from Nottingham. He also hosts the task-based panel show ‘Larklord’ for MissImp: Improv Comedy Nottingham. He’s also relatively excited about Late Stage Comedy, though he wrote this after designing all the posters, so who knows?
Follow John on Twitter @johnjamesmorris