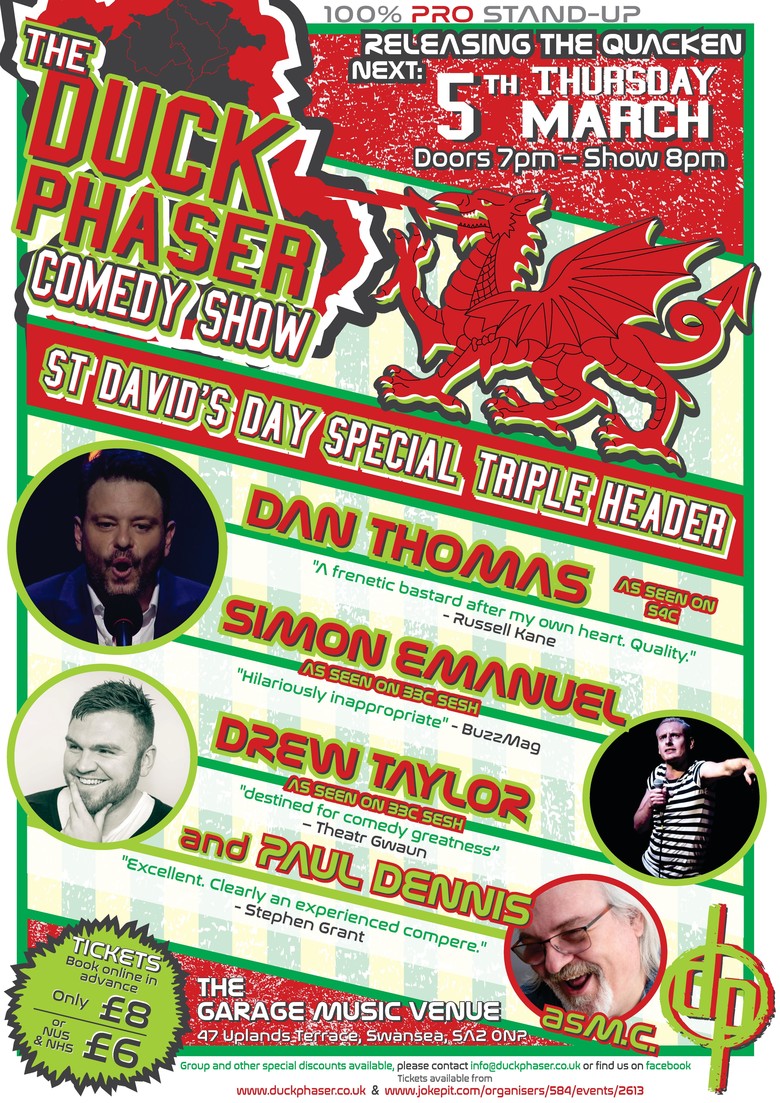 DAN THOMAS
Dan has been a favourite on the UK comedy circuit for 15 years.
He’s supported Lee Evans, Elis James, Russell Howard and toured with Russell Kane.
He has appeared on countless TV and radio shows and has recently written for The Leak (BBC) and Welcome Strangers (BBC), and has also produced several welsh-language stand-up specials for S4C.
As an actor he has appeared in several TV, feature and radio projects and will next be seen in Series 3 of the international hit thriller, “Keeping Faith”.
SIMON EMANUEL
Simon Emanuel is a Welsh stand up comic, TV presenter and radio personalty who is working live all over the UK and Europe
Starting in 2008 he has had a successful live career working with some of the biggest names on the comedy circuit and appearing at most of the top clubs nationally and internationally.

His manic energy, quick wit, far flung Observations and abstract delivery of ridiculous punch lines make him a firm favourite wherever he goes.

In 2012 after a successful fringe festival he moved his comedy stylings to Norway to be part of the English speaking comedy scene where he was the house MC for The Oslo Comedy Clubs for a ten month period, During this time he moved regularly around the Scandinavian scene doing live work in Sweden,  Denmark and Finland.

Upon his return to the UK in 2013 Simon was awarded the Welsh Unsigned Stand Up of the year award, He then went on to appear on Rhodd Gilberts BBC Wales Radio show and was selected to support Alan Davies on the final day of Cardiff Comedy Gala at the prestigious Cardiff Millennium centre.

In 2014 Simon was named on the Wales Online list of "Top welsh comics to keep your eye on at the fringe" and since March 2015 he has been a regular guest on BBC Radio Wales's "The Jamie Owen show" where he offers his unique views on weeks news and current affairs.

In 2016 after a few guest spots for the Channel Simon started writing and presenting for the sky channel "Made in Cardiff" working on a weekly show "Bad Press" with fellow comic Ignacio Lopez, They have also worked closely on other programmes including the entertainment show "The Lowdown" and the live comedy show "Live at the Glee"
In 2017 he was support for Tom Green's European tour at the Glee Club Cardiff and since January 2018 Simon has been one of the main writers and stars of the BBC Sesh online content.

“A Welsh bundle of charm, Simon turns the problems he encounters in life into a unique brand of observational comedy with brilliant delivery. Simon is summed up in one word “hilarious” - Comedy Callback

DREW TAYLOR
South Wales based Drew has been making waves all over the UK comedy scene despite only being active since April 2015. Sharp, observational comedy at its best, Drew is one to watch for the future.Whilst equally proficient at opening, middling or closing comedy nights, Drew is quickly building a reputation as a specialist comedy MC, combining interactive crowd work with his own brand of unique humour. Performing at some of the biggest clubs in the U.K. such as Jongleurs, Hot Water, Frog and Bucket and Glee Club; Drew also recently hosted the big closing gala at the Merthyr Comedy Festival in South Wales.
& PAUL DENNIS your resident MC.

Line-up subject to change, unfortunately we are unable to provide refunds.  100 seats are available but the venue capacity allows for a standing in the bar area.

Special discount for student and any NHS employee.