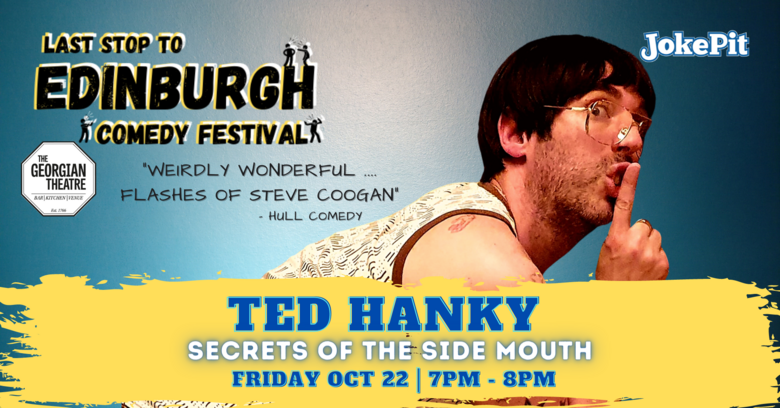 Ted Hanky: Secrets of the Side Mouth

All adult shows at The Last Stop To Edinburgh are Edinburgh Preview/Work in Progress Shows. This is why the tickets are a really good price. Plus you get to see the shows before these amazing acts tour them or take them up to the Fringe and no doubt gain critical acclaim and hopefully win awards.

TED HANKY: SECRETS OF THE SIDE MOUTH (WIP)

Join Ted Hanky for his debut (work in progress) 60 min solo show as he shares his recent lockdown experiences of dealing with online selling site Doyles, joining clubs and societies, buying rubbish off Amazon, TikTok .... and the secrets of the side mouth

A local favourite, Ted and has featured many times on Boro Fan TV, BBC Radio Tees, The Tyne Tees News, BBC Radio Leeds, Neil Warnock's CCTV .... and Babestation! He hosts a weekly online show called 'Ted Talks - Live' with his good pal Mala.
You may have also listened to Ted's hit podcast 'Ted Talks - The Ted Hanky Podcast'? ... If not ... why not? Its proper class like!

Ted is the creation of local actor and character comedian Phil Smith as seen on BBC1's 'This is My House' and Dave's 'Storage Hunters UK',
Phil is also a member of improv comedy group 'The Discount Comedy Checkout' and sketch show/panel show double act 'The Halls of Ridiculous'.

"Ted Hanky is the Salvador Dali of comedy, hilariously bizarre to watch, a wonderfully daft character and will have you giggling all the way back to his allotment... Hilarious!"
- The Laughing Pug Comedy Club


CHECK OUT OUR  DOUBLE SHOW TICKET OFFER TO SEE THIS AND THE NEXT SHOW: FRAN GARRITY: FIFTY/50

YOU CAN ALSO PURCHASE A TICKET TO ATTEND ALL THREE FRIDAY SHOWS OR A VIP TICKET TO COME TO ALL SHOWS ACROSS BOTH DAYS.

WE ALSO HAVE KIDS/FAMILY COMEDY SHOWS ON THE SATURDAY AFTERNOON. CHECK OUT THE TICKET LISTINGS FOR MORE INFO.

BAR IS OPEN FROM 5PM
THEATRE DOORS FOR THIS SHOW OPEN AT 6:30PM. THE SHOW STARTS BANG ON 7PM
LATE COMERS MAY BE REFUSED ENTRY.
THIS IS THE 1ST OF 3 ADULT SHOWS THAT EVENING.
THERE WILL BE 30 MINUTES INTERVAL BETWEEN EACH SHOW.

Duncan p reviewed Ted Hanky: Secrets of the Side Mouth which happened on 6:59pm on Fri 22nd Oct 2021.

Philip T reviewed Ted Hanky: Secrets of the Side Mouth which happened on 6:59pm on Fri 22nd Oct 2021.

Another person behind the bar might have helped with the big queue!