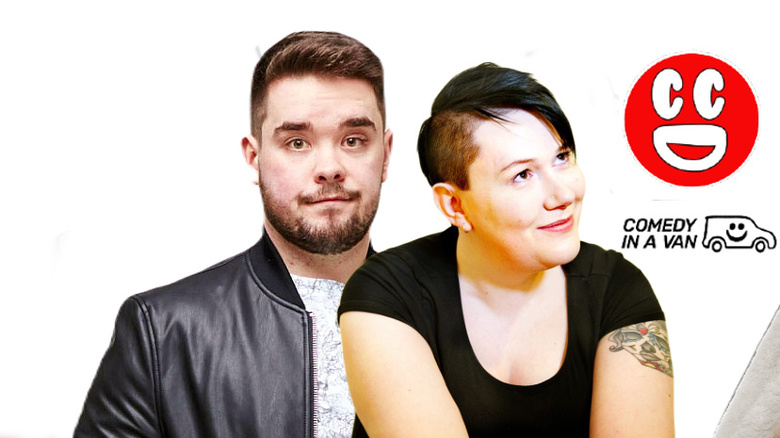 Acts subject to change. Fully seated. 18+ Proper sweary swearing. We want all our guests to have a great night so please respect those around you by turning off your phone and not talking whilst the show is in progress. We can only refund or reallocate if the show is cancelled. Thanks!

Well, where do we start when it comes to Bethany Black? We could tell you that Chorley’s funniest daughter is Britain’s only goth, lesbian, transsexual comedian but that was fully covered in her debut show ‘Beth Becomes Her’.As well as making people laugh a lot, Beth was spotted by Russell T Davis and played ‘Helen’ in Channel 4 series’ Cucumber, Banana and Tofu.We could also tell you Beth is a bit of nerd and something of a Doctor Who obsessive but, how many Whovians can claim to have actually appeared in the show? Beth did in 2015 when she played 474.

This is all well and good but just how funny is she? Oh, don’t worry about that as the answer is ‘very’. Awards include winnning the 2020 Joe.co.uk comedy award and is British Comedy Guide recommended.

“I went for an hour laughing at every other word” ★★★★★ LGBT Arts Review.
Widely regarded as one of the most exciting, young comics in the world; Adam Rowe has risen from a prodigious newcomer to an international headline act, since his debut in 2010. He is one of the most sought after acts for all of The UK’s biggest comedy clubs & festivals, whilst he has also performed in & headlined clubs in The Middle East & The United States.

His natural, laid back persona combined with brutally honest, opinionated stand-up and his phenomenal ad-libbing ability make each of his performances unique, gloriously unpredictable and, most importantly, always hilarious.
Adam has opened for Andrew Schulz, Jason Manford and was hand-picked to support Bill Burr on the UK leg of his 2019 tour “50”, including two nights at the iconic Royal Albert Hall in London. He’s completed three solo tours; ‘Unbearable’ (2017) and ‘Undeniable’ (2018), both of which sold out dates all over the UK and in 2019 he will take his third solo tour ‘Pinnacle’ on the road, before taping this show as an hour-long special in 2020.

In 2020 Adam launched the Have a Word podcast which has become hugely popular and released his debut stand up special ‘Club Comic’ on YouTube. He has racked up over 50 million views of his stand up online across various platforms such as his YouTube channel, his social media pages and viral-sharing pages such as ‘LadBible’, ‘UniLad’ and ‘Live At Hot Water Comedy Club’.

Doors 7pm Show 7.45pm Please get here in plenty of time to reduce queuing at the bar. Acts subject to change. Fully seated. We want all our guests to have a great night so please respect those around you by turning off your phone and not talking whilst the show is in progress. Thanks! Sorry, but we can only refund or reallocate if the show is cancelled.