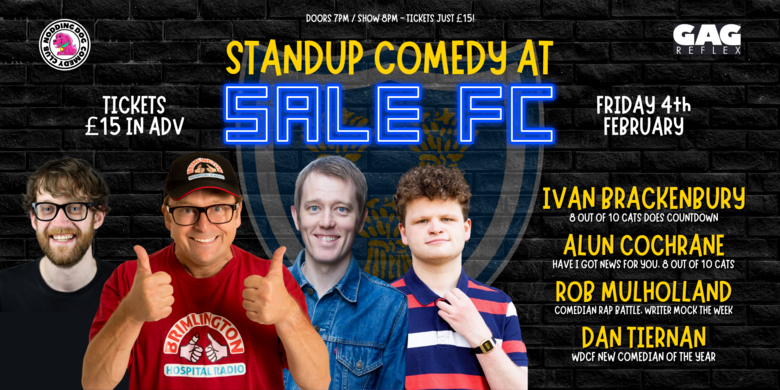 Join us for the launch of StandUp Comedy At Sale FC on Friday 4th February!

For one of the oldest rugby clubs in the world we felt we needed to put on something a bit amazing...and you are not going to be dissapointed.

Welcome to the stage...

A daft, inept yet adorable radio DJ takes you on a hilarious broadcasting journey. This is a unique, wonderfully brilliant show, guaranteed to make you cry with laughter 'Audiences are laughing their heads off' - Metro

Alun Cochrane is an Award-winning stand-up comedian who has appeared on numerous TV shows including Michael McIntyre’s Comedy Roadshow, Russell Howard’s Good News, Mock The Week, Dave’s One Night Stand, Never Mind The Buzzcocks, Have I Got News For You and 8 Out Of 10 Cats. He was featured as series regular ‘Sam’ in the Sky Living sitcom Trying Again, alongside Chris Addison and has appeared in Coronation Street, Boomers and Russell Howard’s Christmas film A Gert Lush Christmas. Alun is the co-host of The Frank Skinner Show on Absolute, for which he received a 2012 Arqiva Award nomination for Best Newcomer. The show also won a Sony Award in 2011 for Best Entertainment Programme and was nominated again in 2012. He regularly features on BBC Radio 4’s The Comedy Club. Other radio credits include The Now Show, Just A Minute, Dilemma, Loose Ends, Lee Mack And Friends and Listomania. Alun wrote and starred in the Radio 4 series Alun Cochrane’s Fun House, offering listeners a room-by-room stand up tour of his home.

Dan Tiernan is an act currently on fire! Seeming to win every new comedy competition he enters, including the West Didsbury Comedy Festival New Comedian of the Year! He is rightly being tipped for big things and with an ever growing army of new fans you can say you saw him early, if not first!

MC Rob Mulholland will be holding things together. Six foot seven of pure funny, Rob Mulholland is a bombastic, mischievous gag-slinging rascal with a heart full of humour and gob full of shite. An established, bullet-proof comedy Pro forged in the fires of the northern comedy circuit who now travels the world packing big belly laughs. A regular at all the biggest comedy clubs in the UK

With such an amazing line up this is sure to be a very popular event so snap up your tickets early for a night not to be missed!

Line-up subject to change, unfortunately we are unable to provide refunds - unless Boris shuts us down in which case all refunds will be processed immediately. We follow all COVID guidelines very strictly so you can attend in confidence!

Brilliant night with a great line up and format. Would definitely come to another show here

Lovely evening enjoyed it comedians and compere all funny guys… hope you do more of these nights…!! I would definitely attend…