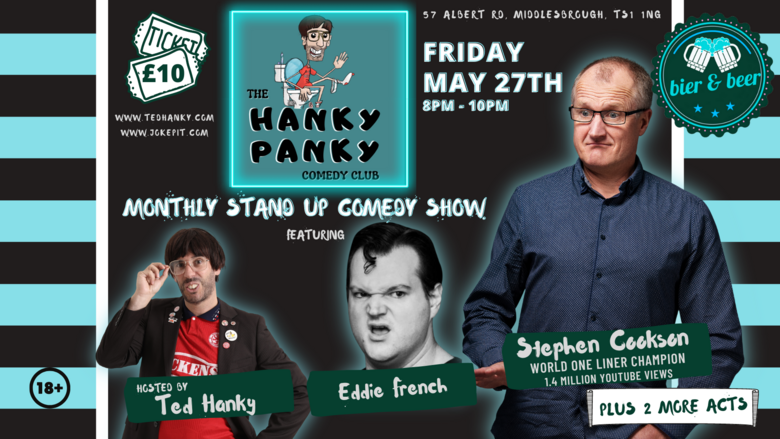 Stephen is based in the North West of England was the World One Liner Champion of 2019.

His 6 minute spot at Hot Water Comedy Club, Liverpool, in October 2017, currently has over 1.4 million views on Youtube!He is a clean, deadpan comedian with quirky one liners and dry observations.

Winner Barnoldswick comedian of the year 2016.

Runner up Nando's new comedian of the year 2015.
Quotes:"Old whippersnapper and worryingly funny. Frankly I hope he stops doing comedy before he costs me work"
- Gary Delaney
“Stephen Cookson has some of the finest crafted one-liners on the circuit today. He also possesses a finely tuned comic timing way beyond his experience as a newer comic"
- Phil Walker
“Deadpan one-liners that were perfectly executed and written. Had one lady hyperventilating and begging for him to stop. The quality of this man’s gags are up there with Milton Jones and Gary Delaney”
- Bryan Malcolm (The Haha Club)
“A masterclass in one liner comedy” Rick Hulse

Eddie French just wants answers.
Sadly, they have none. But they will try their best to find some. Noisely.

As well as stand up, Eddie is also member of cult improv masters The Discount Comedy Checkout who regularly gig across the North east and Yorkshire.

A self described northern working class clown, and man child about town. Kyle is excitable, and aggressively energetically covering everything he can from being the shortest, albeit eldest of two brothers growing up, a first time uncle, struggling with his own wavering masculinity to being a fan of die hard... With impressions, observations, and whatever flies from of his mouth"

"Kyle has such energy and likeability. A great comic who had them in his palm....the bastard." - Alex lowe/ Clinton Baptiste

Absolutely brilliant night at this venue! I had never been before but would definitely go back. All the comedians were so funny and the host was absolutely fantastic from start to finish. Really good priced drinks and lovely welcoming atmosphere.

We had a fantastic night. Top class acts in a warm and friendly atmosphere. Kyle Kraze smashed his set and Ted did an amazing job of getting the crowd going between acts.