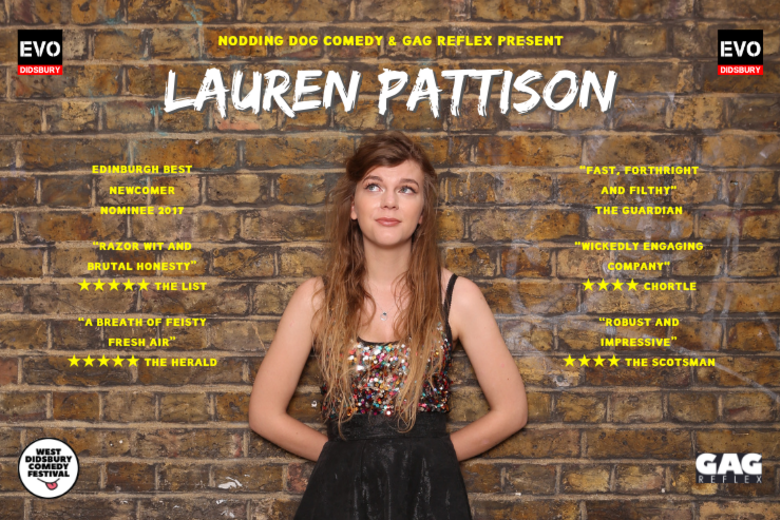 Lauren Pattison: It Is What It Is (WIP)

LAUREN PATTISON with a work in progress of her new one hour show, "It Is What It Is".

As an actor her credits include Drunk History (ComedyCentral), Jerk(BBC3) and Climaxed(BBC3). Bursting out of the North East and onto the international circuit, Lauren has performed at numerous national and international festivals. In 2018, she was the only UK rising star invited to Just for Laughs Comedy Festival in Montreal, performing on the Brit(ish) lineup alongside Sara Pascoe, Joel Dommett, Ed Gamble and Nish Kumar. Along with Montreal, she has performed at Adelaide, Perth, Melbourne, Sydney, New Zealand and Kilkenny International Comedy Festivals. In Autumn 2017 she toured India for two weeks with Soho Theatre, playing in Bangalore, Goa and Mumbai.

After finishing runner up at the Funny Women Awards in 2014 aged just 20, Lauren went on to make the final of every major new act competition. She was the only female comedian to reach the final of the Chortle Student Comedy Awards in 2015 and in 2016 reached the final of the prestigious BBC New Comedy Awards. A sought after act, Lauren is a regular at all the major national comedy clubs and has provided tour support for Katherine Ryan, Jason Manford, Kerry Godliman, Stewart Francis and Dane Baptiste, as well as gracing the comedy stages of Latitude and Reading and Leeds Festivals.

“A breath of feisty fresh air” – ★★★★★ The Heral
“Razor wit and brutal honesty” – ★★★★★ The List
“Because of Pattison’s Geordie roots and indecent subject matter, comparisons will no doubt be made with Sarah Millican... those comparisons would be unfair, though: whisper it, but Pattison might just turn out to be a whole lot funnier” – ★★★★The Telegraph
“Stunning youthful debut” – ★★★★ The Sunday Times
“Wickedly engaging company” – ★★★★ Chortle
“Robust and impressive” – ★★★★ The Scotsman
“Fast, Forthright and Filthy” – The Guardian

Erika’s razor-sharp, dark and visceral writing paired with precise delivery makes her one of the most exciting young comedians on the circuit. Originally from Toronto, Canada, Erika now lives in the UK after completing the Comedy Writing and Performance Program at Salford University.

In 2019, she was crowned winner of the Chortle Student Comedy Award, was the recipient of the Mike Craig Comedy Award, and the Hot Water Roast Battle Champion. She has performed at the Edinburgh Fringe, Latitude Festival, and the Toronto Sketch Comedy Festival.

Erika has recently written for the fourth series of Comedy Central’s Roast Battle, Netflix’s Death to 2020, BBC’s Have I Got News For You,  Dave’s Bad Advice and Sky’s Never Mind The Buzzcocks.