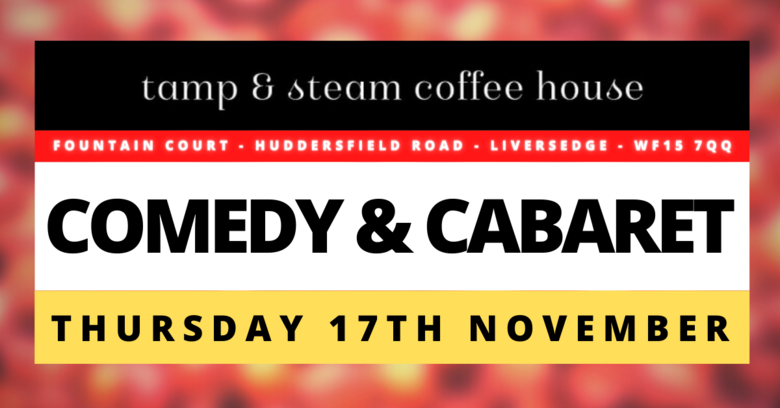 Join us at Tamp & Steam for a night of Comedy & Cabaret! Limited tickets available!
About this event

Your entertainment at Tamp & Steam for the evening…

‘Positive energy and amazing voice! Sadie brings life and fun to her live events and you’re bound to have a smile on your face the whole time you watch and listen’.

Sadie also has a background of writing and recorded original songs and has sung for other songwriters.

‘One of the funniest comedians out there’ – Jason Manford
Phil’s act has taken him to some weird & wonderful places, from a scout hut in Unst in the Shetland Isles to a porta-cabin on mount Alice in the Falkland Islands, basically he’ll go anywhere for a laugh!
Ever since being voted City Life Comedian of the year at the famous comedy store in Manchester, Phil has been in demand as a headline act at most of the leading comedy clubs throughout the country as well as major cruise lines and hotels internationally.
He made his debut at the Edinburgh festival in 2012 where he received four-star critical acclaim for his one-hour show "Is this it? Phil is proud to have entertained over 4000 troops on two tours of war-torn Afghanistan as part of the CSE shows. His other tours include, The Falkland Islands, Kosovo, Kuwait, Bosnia & Germany, appearing with fellow comics as well as megastars including eighties icons Tony Hadley & Bucks Fizz!
Television credits to date include, Talking telephone numbers - ITV1 (three series), Live at Jongleurs - Paramount, The Big Stage - Ch 5, Today with Des & Mel - ITV1 (three series).
2022 has seen Phil be opening act for legendary music icon Frankie Valli as part of his UK tour and also as support act for comedy superstar Jason Manford on his "Like me" tour.
His great act, along with his warm personality & charm have made Phil one of the most sought-after entertainers around today.
Awards:City Life comedian of the year 2002/03Wilkinson Sword Cutting Edge of comedy regional winner & finalist Edinburgh festival 2002.
Quotes:"If you look in your local comedy club listings and ever see Phil Walker listed, get a ticket. One of the funniest acts out there." - Jason Manford.
"Phil Walker radiates an infectious, cheeky energy. He is as comfortable with stand-up as he is with audience interaction, employing Usain-quick wit, He keeps running jokes alive with perfect timing." - Three Weeks Edinburgh ****
"His set moves seamlessly and seemingly effortlessly. The gags and observations keep on coming thick and fast, He can pretty much guarantee a good night out, Walker is crackingly good!" - Chortle.

“Thoroughly engaging presence” - Chortle
“Grabs your attention and holds it” - Notts Comedy Review
“Viscerally relatable” - The Meteor
Charlotte Cropper, a young comedian from the East Midlands now based in the North West, is deceptively playful on stage.
She was a Chortle Student Comedy Award 2021 Finalist and has had her digital comedy streamed by Funny Women and broadcast by BBC Upload.
Her sets are laced with wit and whimsy and she can’t wait to share her innermost thoughts with you at Tamp & Steam!

‘A young Russell Howard, with a moustache’ – Notts Comedy Review

Jack McLean is a comedian from Hull, now living in Leeds. A strong record in all the major comedy gong shows, Jack is fast gaining a reputation for being one of the funniest new talents on the northern comedy circuit.


Hosted and MC'd by Jim Burke

After being banned several times for the repeated use of a word that - in Glasgow - is a term of affection, Jim has recently returned to Twitter as @barcajim3 (and now regularly uses the term '*redacted word*' in most of his interactions.

First comedian was terrible which brought the whole score down. Took a while for the atmosphere to get going. But all together an enjoyable night.