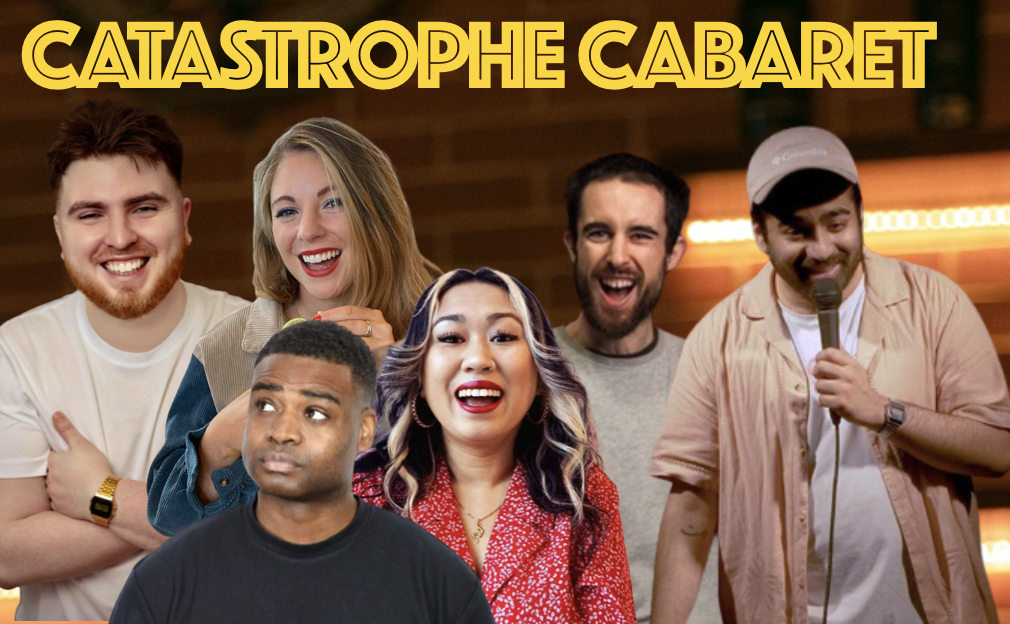 Luke Nixon (BBC Radio 4) is an observational comic who loves doing characters. He has appeared on the same bills as Nick Helm & Ben Norris. Luke recently competed in the NATYS (New Act of the Year | Soho Theatre) before finishing a run at the Brighton Fringe as a co-MC with Double Bubble comedy.  “Luke has obviously funny bones” Jenny Eclair “Book him, very funny.” Mike Gunn “Fat b*stard”  Steve Coogan.


The evening’s jazz is curated by Robbie Ellison, one of the country’s most in demand young straight-ahead drummers. Since graduating from the Guildhall, he is a regular performer at the UKs top jazz venues such as Ronnie Scotts, 606, Barbican, Pizza Express Soho & many more.


JOINING US AT CATASTROPHE CABARET THIS MONTH:

Roman Harris mixes anecdotal and observational comedy with his quirkiness and devilment,  telling tales of his relationships and life experiences. Roman has graced the stage at popular London clubs, such as Backyard Comedy Club, Vauxhall Comedy Club and Up The Creek, winning their blackout competition on his first appearance. He was also shortlisted for the BBC New Comedy Awards 2021 and First Runner up in the 2022 NATYS.

Mustafa Yasin is an exciting new voice in British comedy. He's been a regular on the UK comedy scene since he started performing stand up in 2018, the same year he was a runner up at the Laughing Horse New Act of the Year competition 2018, the next year he won the Quantum Leopard Champion of Champions award 2019 and was nominated for the prestigious Leicester Mercury Comedian of the Year award in 2020.

Su Mi is a British Malaysian Alternative Comedienne born from the treacherous depths of East London. High energy and storytelling. Semi-finalist for the Comedy Max Turner prize 2022 , the WINNER of Queerovision comedy night 2022 and Quarter- finalist for SKETCH OFF 2022

Luke Chilton regularly performs at top comedy venues across London including Banana Cabaret, Up the Creek, the StandUp Club, Angel Comedy (Bill Murray), Downstairs at the King’s Head and Vauxhall Comedy Club. He has provided tour support for Bobby Mair, reached the final 10 of BBC New Comedy Award 2019, nominated for Up the Creek: One to Watch 2019 and a Finalist NATY 2022. His stand up has appeared on radio multiple times and you can find him every Wednesday at Vauxhall Comedy Club where he serves as the resident MC.