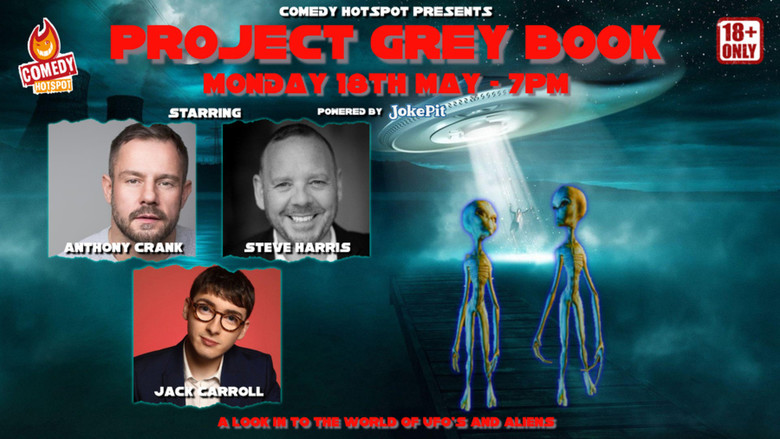 Welcome to Project Grey Book, a show that explores the world of Aliens and UFO's. Each week Anthony Crank and Steve Harris will be discussing this mysterious world, recounting first hand experiences, guest experiences and well charted facts....all of which will blow your mind.

INTRODUCING THE TEAM
Anthony Crank
Our host, and he has some pedigree.
Having started out as a model before moving in to journalism writing for such titles as Mizz, Sky, More!, Attitude, AXM and OK.
Channel 4 then came knocking, and he ended up hosting role on T4, and he also appeared on sister channels E4, T4 Holiday Mornings, T4 on the Beach, T4/C4 movie specials and C4.
In short, there are few channels Anthony hasn't appeared on. He is also a gifted actor, appearing in both film and TV, and you may recognise him from shows such as Coronation Street and as Billy in Shameless.
Steve Harris
Steve first leapt on stage back in August 1998 and within 3 months had won himself the coveted North-West comedian of the year award after just 5 gigs.A finalist of the BBC new comedy awards and Channel 4’s “So you think you’re funny” in the same year, Steve went on to headline all of the top comedy clubs in the UK including venues as far flung as Hong Kong and Australia. With his ever-expanding reputation the demand for Steve has come from all different types of media outlets including Radio and Television.With support slots with the likes of Johnny Vegas, Peter Kay and Lee Evans, Steve comes highly recommended from the heavy weights of comedy themselves.
Steve is also a gifted actor, and most recently could be seen in Coronation Street and Hollyoaks.
Steve is an Alien and UFO expert, and is by the time we go live, he will be a fully qualified Ufologist.

This weeks special guest is Jack Carrol, Britains Got Talent Runner Up, and star of TV and Film....most notable being Trollied and Eaten By Lions.