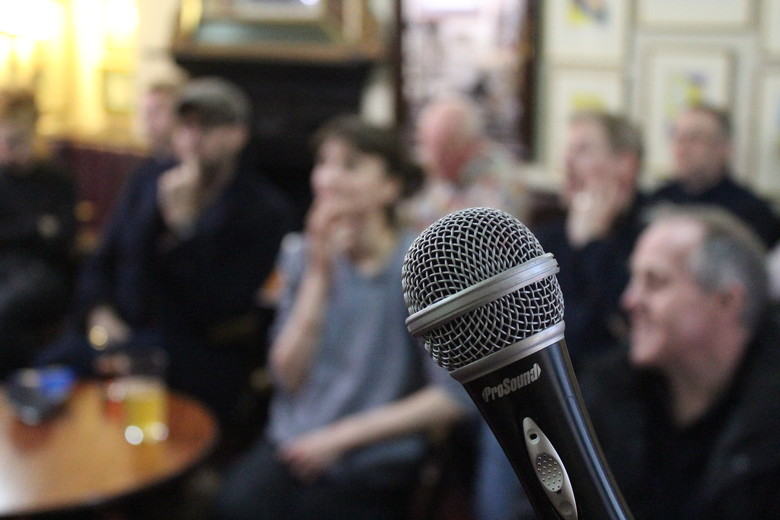 LEVEL 1 STAND-UP For nervous newcomers to stand-up (and more confident ones too). Learn how to stand up, be yourself and be funny in front of an audience in the exact same way you're funny with your friends. Just with more punchlines per minute.

Over ten weeks, create and perform a brand new five-minute stand up comedy act. In the experienced hands of Chris Head (comedy director, teacher and author of "A Director's Guide to the Art of Stand-up") you will be guided through developing your persona (the heightened version of yourself you present on stage), creating material and delivering it so it works. The secret is for you to be yourself on stage and to tap into the naturally funny voice you already have.

This highly acclaimed stand-up course has been running for fifteen years and hundreds have done it. Why do it? Some do it for the killer public speaking skills (no work presentations or wedding speeches are a problem after this). Some to tick stand-up off their bucket list. Some want to get out onto the stand-up circuit - and they do. Practically every night there is someone somewhere performing on the circuit who has done one of Chris' courses or had one-to-one coaching, including many pro comics. Festivals too are crawling with his graduates...

Develop your act in a safe environment over 9 evenings and perform in a friendly showcase gig on the final night that will leave you buzzing. On the course you'll learn how to write gags and conversational material, you'll discover your persona, learn how to deal with hecklers and how to get gigs. Week-by-week you will create a stand-up act which you will perform in a special showcase gig at the end of the course in Soho. Always a great night with an up-for-it, supportive audience and expert compere from the comedy circuit. Excellent retention on the course and even those nervous at the start overwhelmingly go on to perform in the show. (The lively, end-of-course showcase on the 16th March is also in Soho at the Karma Sanctum Hotel on Warwick Street, around the corner from the weekly sessions. It'll be a buzzing, centrally located event in a classy space.)

Testimonials:
"I always thought stand-up looked fun, so took the course on a whim. From the moment I touched a mic, I knew this would be a part of my life forever. The course was a perfect introduction for someone who was clueless. Within a couple of weeks, I felt comfortable writing and performing, and by then end of the course I had a well developed 7 minutes. My first gig outside the course, my peers were shocked at how advanced I was for how little experience I had."
Robyn Perkins

"From my very first lesson with Chris I knew that I’d made one of the best decisions of my life, to have a go at stand-up. As a fairly shy person with an acute inability to stand and speak in front of other people, the course provided an enjoyable environment allowing me to immediately get behind the mic and have a go, without feeling uncomfortable. Each week we would try different exercises, building our understanding of the mechanics of telling a joke and performing a comedy set. As the course progressed I developed my material, discovering what did or didn’t work.

The thrill of finding that you had something that made people laugh was exhilarating and addictive. Gradually you learnt how to write better jokes and improve your material, so that you reached the end of course gig with enough confidence in your work to overcome the obvious fear of performing live! The adrenaline rush when I came off stage was like nothing I have ever experienced before. I’m now having the ride of my life, with more gigs under my belt and the confidence to write and perform more material. As a new starter on the circuit the course provides you with a thought process and knowledge that gives you a head start over others trying stand up for the first time. Chris is an inspiration and a joy to work with. A 'master craftsman' at what he does. If you are in two minds about whether to book on one of Chris’s courses, I promise you won’t regret it. It will change your life."
Ian Murrill

Press:
"Everyone managed to craft five minutes of comedy delivered with surprising confidence and pizazz on the night [of the end-of-course show]. The performances I saw were incredibly polished and (thankfully) very funny. While naturally some were funnier than others, I would never have guessed they were a bunch of first timers." London Evening Standard

"His knowledge of comedy was captivating, encyclopedic."
BBC Arts Editor, Will Gompertz

"The idea person to nurture new talent."
The Guardian

Nervous beginners welcome! It's a safe and inspiring environment to expand your comfort zone.