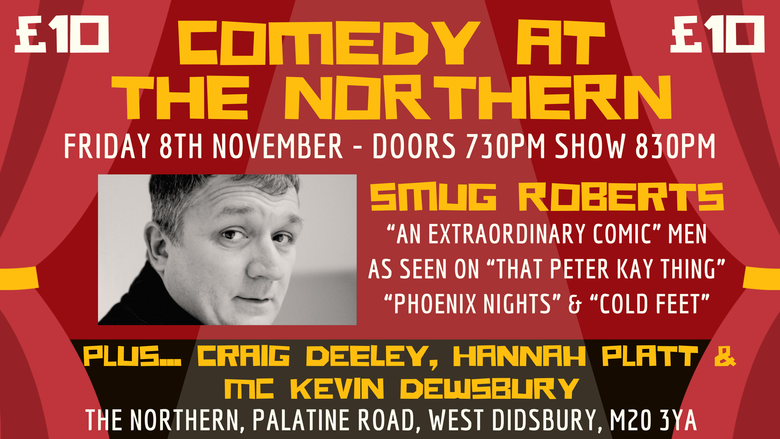 Comedy at the Northern

WELCOME TO COMEDY AT THE NORTHERN

Launch night on Friday 8th November 2019 at The Northern. 4 top comedians for just £10!

MC KEVIN DEWSBURY (“His delivery is spot on, delightfully funny” Broadway Baby) is your host presenting...

“An extraordinary comic” Manchester Evening News
“A brilliant act, he defies description and has to be seen” City Life
“A master storyteller” Radio Times

Opening the show Brummie Craig Deeley is an absolute joy! From real life struggles, surreal absurdities and cutting one-liners, a very in demand comic across the UK.

“Craig Deeley makes me laugh on and off Twitter. Which is rare." Sarah Millican
"Craig’s star is in its ascendancy with his assured delivery, broad appeal and original funny viewpoint on life." Mrs Barbara Nice

Finalist of BBC New Comedian of the Year 2019, Hannah is undoubtedly a rising star!

'Dark, damaged and hilarious' Josie Long
'A voice of a new generation'...'she clearly captures a disaffected youth and world-weariness far beyond her years' The Skinny
'A rising star’ Ents24