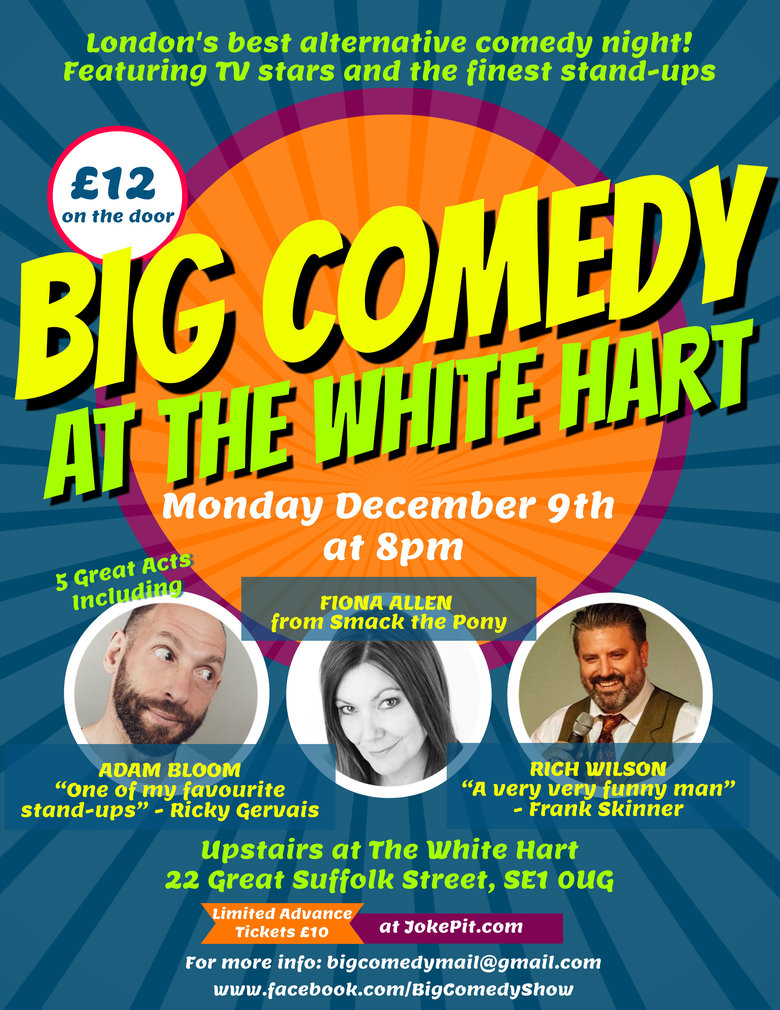 If you like a laugh and want to see top class comedy then Big Comedy at the White Hart is the place for you, an exciting night of stand-up and alternative comedy brought to you by some of the best stand-ups on the circuit.

It's all taking place at The White Hart which is a friendly pub just by Southwark underground station, 5 minutes walk from Blackfriars station and 10 minutes from Waterloo.

This month we have a super-awesome lineup!

Our Headliner is one of Britain's most inventive comedians as seen on Never Mind The Buzzcocks and Mock The Week.

He has performed sell-out solo shows at the ‘96, ’97, ’98, ’99, '01, '04 & '07 Edinburgh Festivals as well as performing a sell-out tour of Britain. He has also sold out theatres at festivals in Melbourne, Sydney, Auckland, Wellington & Cape Town. In July '13, Adam made his fifth appearance at ‘Just For Laughs’ in Montreal, including being part of 2004 'Just For Laughs Comedy Tour', playing to 42,000 people in 17 cities across Canada. He has also written three series of ‘The Problem with Adam Bloom’ for BBC Radio 4.

“In the premier league of comedy” - The Independent

“A light-speed wit, focused over years at the pinnacle of stand-up” ★★★★ - Steve Bennet, Chortle.co.uk

“He's been one of my favourite stand-ups for about ten years. Bloom not only has meticulous, brilliant lines, but also an intense and fragile honesty” - Ricky Gervais

The hilarious star of your TV
FIONA ALLEN
As seen in many sketch shows, including We Know Where You Live (Channel 5), Smack the Pony (Channel 4), Goodness Gracious Me and The All Star Comedy Show. She has also appeared in many television dramas including Dalziel and Pascoe and Coronation Street, as well as the sitcom Happiness alongside Paul Whitehouse. Subsequently she appeared as Sandra, in the film version of the Viz comic strip The Fat Slags, and as a panelist on Mock the Week.

As seen on ITV, Sky and Channel 4
MICHELLE DE SWARTE

As heard on the ECBT2000AD podcast

“A true hit. I loved his comedy style and his musings on life. Mixed in with the fun and laughter was some good, deep observations on life. Julius embodies the generational voice of so many” - North West End Rating: ****

“Julius has some of the best jokes I have ever heard” - Vince Maple, Leader of Medway Labour Group

Our amazing MC for the evening, from the wildly popular men’s mental health podcast Insane In The Men Brain

One of the countries finest comedians and popularly regarded as probably the UK's best MC by many top comedians, such as Frank Skinner, Richard Herring and Sarah Millican. Rich has been "winning over audiences in seconds" at all the major UK comedy clubs (Jongleurs, The Comedy Store, The Comedy Cafe, Big Night Out), as well as entertaining audiences in New York, Las Vegas.

Entry is £12 on the door with discounted £10 earlybird on Eventbrite!