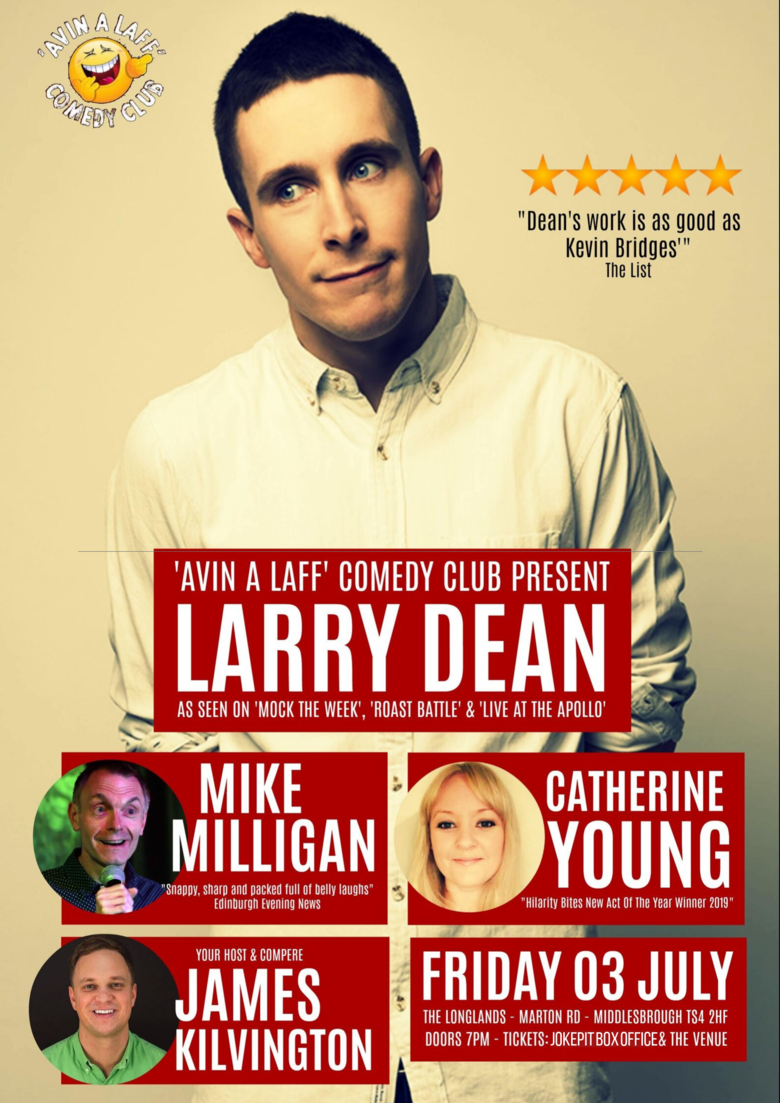 Larry Dean is an award-winning comedian and writer.

He was crowned Scottish Comedian Of The Year when he was 23, and since then his star has continued to rise. His 2015 debut Edinburgh Fringe show Out Now! received both widespread critical acclaim and a nomination for the Foster’s Comedy Award for Best Newcomer. After its success in Edinburgh, January 2016 saw Larry bring the show to London for a run of packed-out performances at the Soho Theatre. He then took the show to the Melbourne International Comedy Festival where he was one of the standout performers on the Allstars Supershow Opening Night Gala.

In 2016, Larry was invited to join the line up on Laugh Out Loud with Kevin Hart at the prestigious Montreal Just For Laughs Comedy Festival. He then returned to Edinburgh with his eagerly awaited new show, Farcissist, for which he won the Amused Moose Comedy Award for Best Show. He subsequently took the show on a UK-wide tour and a run at the 2017 Melbourne Comedy Festival. Fandan, Larry’s next show, enjoyed a sold-out run at the 2017 Edinburgh Fringe and was one of the British Comedy Guide’s Top 10 Best Reviewed Shows that year. Larry also performed the show at Christchurch Buskers Festival and Perth Fringeworld in February 2018 ahead of a sold-out UK tour and a stint at the Melbourne International Comedy Festival.

Later in 2018, Larry took new show Bampot to the Fringe, again receiving a raft of four and five star reviews and receiving a nomination for Best Show in the Edinburgh Comedy Awards. He is currently touring the show around the UK and Ireland.

As well as his live work, Larry’s broadcasting career continues to go from strength to strength. He’s performed on BBC2’s Live at the Apollo and Mock The Week, as well as Comedy Central UK’s Roast Battle. He also previously appeared twice on BBC Presents: Best of the Edinburgh Festival, perfomed stand-up on Live From the Comedy Store for Comedy Central UK and been on ITV2’s Elevenish and BBC Radio 4’s Don’t Make Me Laugh.

James Kilvington is a north east based comedian from the small town of Middlesbrough.

Observation comedy
comes natural to James, and he doesn’t pull no punches when it comes to grilling someone who decides to heckle his act!!!

Avin a Laff Comedy are proud to present comedy genius Larry Dean!!! As seen on Mock the Week, Roast Battle & Live at the Apollo!!!

Front Row Seating. Display your ticket/s upon arrival, we'll email them to you. Enjoy the show.

Standard Entry Tickets. Display your ticket/s upon arrival, we'll email them to you. Enjoy the show.