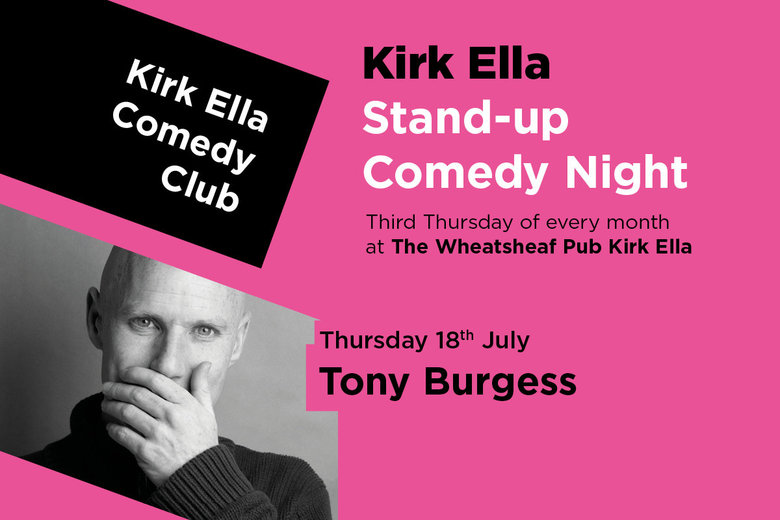 Kirk Ella Comedy Club is a monthly stand up comedy night held at The Wheatsheaf pub in Kirk Ella.
Each month we will bring you four comedians including a top headliner from the comedy circuit, all introduced by a regular compere.
Our headliner for July is none other than Tony Burgess. You may recognise Tony from his role in the cult BBC3 comedy Ideal where he played DJ Troy, Moz’s crazy, vinyl obsessed brother; you may have seen his self penned BBC sitcom The Visit, or maybe you’ve caught him doing stand up where he’s played most established venues throughout the country.
Tony was the winner of the prestigious City Life comedian of the year, came runner up in So You Think You’re Funny and was nominated for best stand up and writer at the North West comedy awards.
He was also a founder member of the topical MEN at work team at the Comedy Store in Manchester, regular compere of the long established Frog and Bucket Comedy club and has supported household names like Johnny Vegas on national theatre tours.
Some of the praise for Tony Burgess:
“…great, well crafted gags” (The Times)
“A demon set and staggering stage presence…” (The Big Issue.)

As well as Tony we will as always have support from a professional comedian opening the show, this month taking this prestigious slot we have Lovdev Barpaga, a cracking act and 2017 UK Pun Champion. Plus two great acts in the middle section. All held together by one of your regular comperes, Jed or Rich (this yet to be determined, probably by an arm wrestling contest).

Doors open 7:30pm, show starts 8:15pm
Tickets £8 in advance or £10 on the door (£7 with NUS / NHS or What’s On Hub card)
Tickets available at HullBoxOffice.com or from the venue itself: The Wheatsheaf, Kirk Ella HU10 7TL

With Kirk Ella Comedy Club, the village's only comedy venue, we aim to provide a unique comedy experience. This intimate club gets you up close and personal with the acts, many of whom are breaking through into TV, or are established acts from the UK and international comedy circuit. We are a welcoming venue and we have a dedicated room for the comedy, with regular breaks between the acts for you to lubricate your throats with laughter juice. With four acts and a compere it's great value for money at less than £2 per comedian. We think it's the most fun you can have with friends on a midweek night out.

Age Restrictions:
No restrictions but please be prepared for some colourful language at times