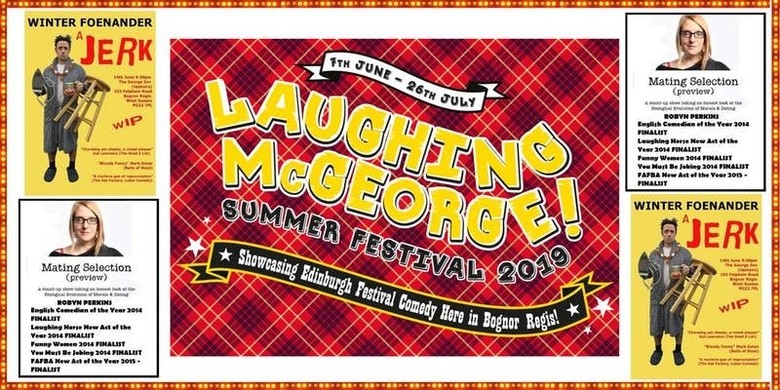 Have you ever wanted to go to the Edinburgh Comedy Festival but its just so far, far away??
All is not lost! We at Laughing George Comedy Club have decided to bring the Edinburgh Comedy Festival to you!
Over 8 weeks from 6th June to 26th July 2019 you can enjoy 16 shows that will be gracing the Edinburgh stages this year!
Laughing McGeorge Summer Festival of Comedy is born!
Each Friday we will showcase 2 shows, each are around an hour long and there will be a half hour break in between to enjoy a drink downstairs or in the garden, tickets for each night cost only £8 each! That is just £4 per Edinburgh show! Come along and support the comedians that are travelling from afar to entertain you down South!

On August 14, 2018, Robyn Perkins (4 Stars, Voice Magazine) participated in a dating show in front of a live audience. Her experience led to her exploring human morality and the social constructs of present day dating, with a scientific twist.

Robyn is known for her “confident, charming and relatable personality” (Edinburgh Festivals), which allows her to delve into complex and uncomfortable territory. How do social constructs change how we date? What is the role of morality in attraction? These questions are explored as she shares the story of the most uncomfortable moment she has ever had on stage.

"For a brain-tickling evening, let the talented (and very clever) @robynHperkins teach you the neuroscienctific implications of losing your girlfriend's gerbils. Brilliantly witty with some fantastic stories along the way. Highly recommend." ★★★★ Fringe Biscuit

A stand-up comedy show about the absurdity of trying to fit in when you clearly don't belong anywhere. The story is a warning that the thoughts you have while on your own aren't always the right ones. All is told with jokes anecdotes and energy.

This will be the first full performance of this show, although parts will have been previewed elsewhere at various clubs around the country before Shaftesbury Fringe.

Winter Foenander is a comedian of Irish-Sri Lankan origin, living in Hemel Hempstead. He has a collection of 39 elephant statues, and one Girraffe from someone who didn’t get the memo.

He has been travelling the world performing stand up comedy since 2012. His interactive show is dotted with jokes and anecdotes throughout.

"Winter creates an instant rapport with the audience as he opens his world up for them to walk around in. A great combination of the absurd and the everyday performed with energy and passion. Looking forward to seeing him again soon." (Honest Comedy)

Tickets are £10 on the door