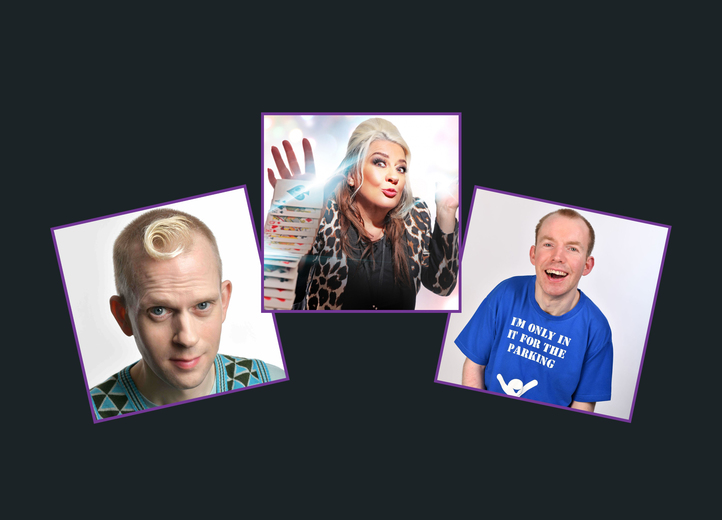 We are very excited to bring you this cutting edge comedy line-up featuring three of the nation's favourite acts from Britain's Got Talent.

​Your host and MC Tony Vino will be joined by Lost Voice Guy, Mandy Muden and Robert White for a night of comedy not-to-missed.

This line-up has been selling out much larger theatres than The Grand, so don't delay in buying your tickets of this brilliant laugh-out-loud comedy showcase.

Leee Ridley AKA Lost Voice Guy may not be able to talk, but he definitely has something to say, and his comedy will leave you speechless.

Since making his first stand up performance in February 2012, Ridley has already gained quite a reputation for being both very funny and totally unique. He has been described as “a wonderful comedian” by Little Britain’s Matt Lucas and has warmed up at Tour shows for the likes of Ross Noble, Patrick Kielty, Jason Manford and Jason Cook.

"The funniest comedian at the Edinburgh Fringe. His banter with the audience is one of the best I have witnessed" – Broadway Baby

He won the BBC New Comedy Award 2014 and won Britain’s Got Talent in 2018. He was the first comic ever to win the show, and when he took to the stage, he delivered one of the most hilarious stand-up routines the show has ever seen.

The Newcastle funnyman, whose cerebral palsy affects his ability to speak, uses a voice synthesiser for his act. He is the first stand up comedian to use a communication aid. Right from the start of the competition, Lost Voice Guy impressed and entertained with his comedy routines, spoken entirely through an iPad app. In order to perform, Ridley uses a speech synthesiser upon which he programs his material before selecting certain lines based on audience reaction.

Multi award-winning performer Robert White is the only gay, Aspergic, quarter-Welsh comic on the British comedy circuit. Known for his brilliant timing and performance style, Robert’s chaotic stage presence, improvisational skills and delivery won him the 2010 Malcolm Hardee Award for Comic Originality. In the same year, he wrote one of Dave’s Top Ten Jokes of The Fringe.

"You're a beautiful soul. Comedy flows from you like water" – David Walliams

Since he first came onto the stand-up scene, as a finalist in the prestigious Hackney Empire Competition, Robert has gone from strength to strength. He is now a sought-after act who regularly performs across the country and internationally. His off the wall jokes, improvisatory songs, barely-believable stories and interactive music stand him far apart from the usual comedy available nationwide.

"If you want to see something brilliant, confusing and strange, you couldn’t do much better " – The Scotsman

Mandy is the only woman ever to combine Comedy and Magic on the UK Comedy and Corporate circuits and has been awarded The Magic Circle Carlton Award for Comedy in Magic.

She has a striking personality with a razor sharp wit and so creates a fantastic rapport, offering a great line in audience participation. She can adapt her show to any type of event and audience from an intimate gathering to a massive auditorium. Having performed all over the world from Comedy Clubs to Buckingham Palace.

"Tommy Cooper was a great magician and really funny, and you are too! Fantastic!" - David Walliams

"YOU have got funny bones…your timing is brilliant, I love you" - Amanda Holden

Age Restrictions:
*Over 18's only