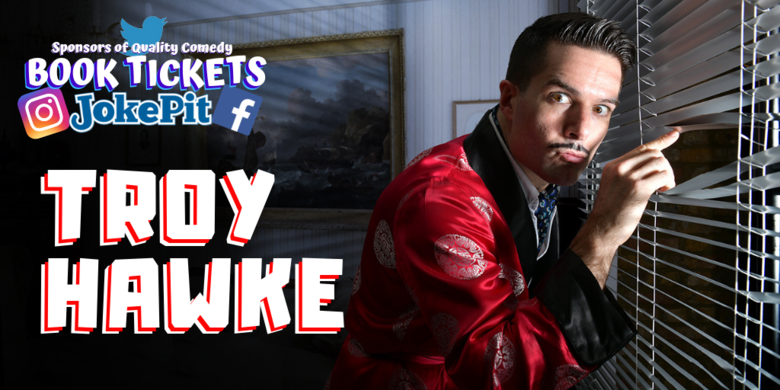 TROY HAWKE - 'TILES OF THE UNEXPECTED!' Plus Support from Anth Young & Fran Garrity

Troy Hawke - 'Tiles of the Unexpected!'

Following a sellout run in 2018 in which he exposed Bingo as the deadliest sport in the country, the empty marxist promise of Poundland’s false advertising and Aldi being responsible for Princess Diana, 1930’s throwback comedic investigator Troy Hawke returns, applying his scrabble mentalism to Kanye West, xenophobia and the ugly truth of Ikea’s link to the CIA

"Spectacular character... Razor-sharp wit laced with a touch of the surreal" - **** Fest

TV credits include:
ITV'S Benidorm, BBC3's Live at the Electric and various hidden camera and talking heads projects on Channel 4 and 5.

A comedy club regular across the UK, he's certain to leave any audience in stitches.
Young is also the tour support act for Carl Hutchinson.

"A bullet proof act who has exciting potential"- Carl Hutchinson

"he has long career ahead of him.: - Broadway Baby

2017 - Support for Jason Manford, & Harrogate Comedian of the year finalist

2015- Finalist for the" City comedian of the year & FAF Breakthrough Act.

Our MC for the night, as always, is the very funny Chris Lumb

With more strings to his comedy bow than a funny Robin hood, he's a comedy director having award winning films played at festivals such as Raindance.
Also a keen impressionist Chris also appeared on 'Russell Howard's Good News'.

HOW TO GET TICKETS?

An absolute snip for such a sterling line up.

*small booking fee to be added to online purchases

You can also pick up advance tickets direct from the Georgian Theatre Box Office:
https://georgiantheatre.co.uk/live-events

Age Restrictions:
Recommended Age: 15+. Under 16's must be accompanied by an adult with a valid ticket. The show may contain bad language and subjects of an adult nature. All under 25's may be asked to produce valid ID when purchasing alcohol.

Discounted online ticket and guarantees admission. Also LIMITED on the door tickets for £13.
No paper tickets will be issued for this event. Display your ticket/s upon arrival, we'll email them to you. Enjoy the show. NB: A small transaction fee of 10% is added to each ticket sale.