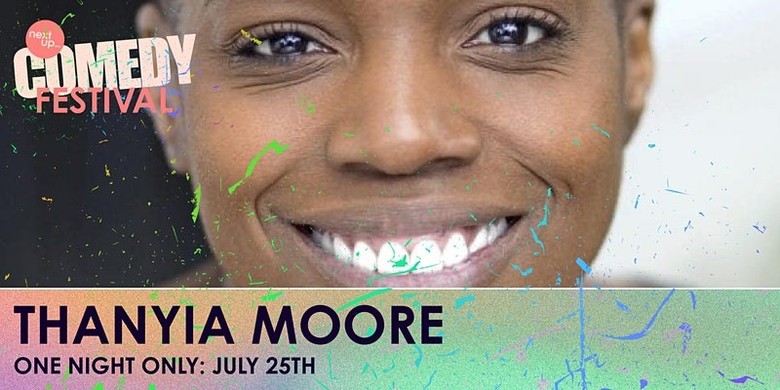 She is one of the only females in the UK who works both the mainstream and Black comedy scenes simultaneously. This position was cemented when she reached the semi-finals of the BBC New Comedy Award in 2018.

She has performed across the UK and the world, including The USA, Turkey, Sweden, Holland, Spain and Slovenia. She has performed alongside some of the best known comics on the scene today, including but not limited to – Dane Baptiste, Desiree Birch and Ellie Taylor (all of whom she has recently supported on tour) Imran Khan, Paul Chowdhury, Suzi Ruffell, Richard Blackwood, & Joel Dommett.

As well as being the founder and host of her own night ‘Moore Laughter’, She is a regular at Top Secret Comedy, Angel Comedy, Glee Clubs and Hysterical Women. She also lends herself to many charitable causes, one in particular, The Sunshine Foundation holds a special place in Thanyia’s heart, as they work with children with special needs both in the UK and the Caribbean.

Thanyia has been invited to speak on current affairs on Channel 4, BBC Radio London and Talkradio. She has also written for Modern Woman magazine. She has spoken at Women in leadership summits for the National literacy Trust, hosted the first UK Bi-Pride main stage and has spoken at the prestigious Pride in London & Brunel Univeristy.

In 2017 she joined the likes of Katherine Ryan, Andi Osho, Sarah Millican, Miss London Hughes, and Desiree Birch when she was crowned Funny Women Champion, Beating over 400 women in the process.

Start Time: We recommend joining at 7:30pm (UK time) to ensure you’re set-up for an 8pm start. Each gig lasts around 50-60 minutes.