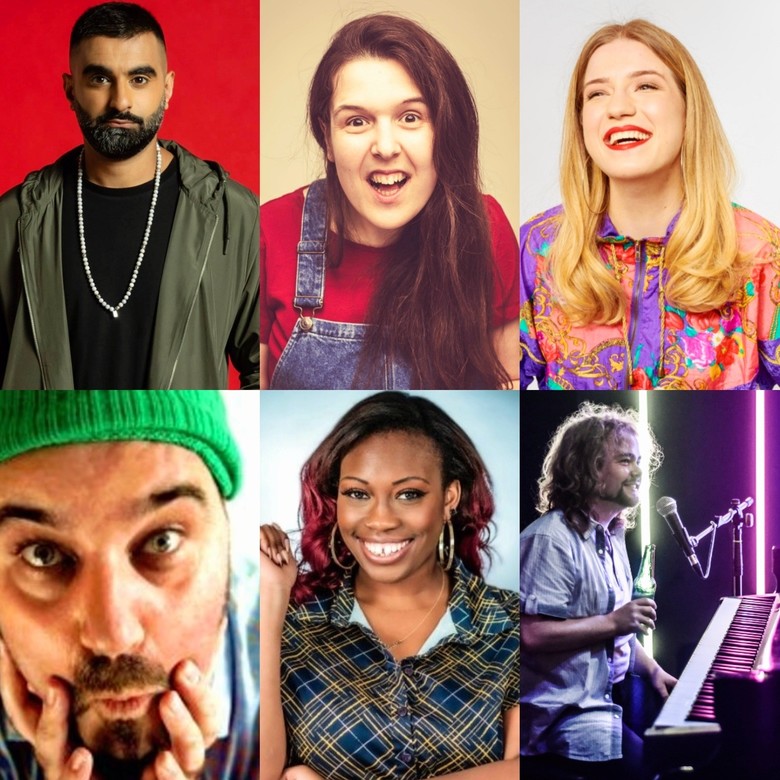 Following the success of our big parties at end of Dec, Jan and Feb we're back for a fourth and final time to celebrate end of March


Thanks for the amazing audience feedback and looking forward to doing it all again for a big end of March Saturday night show full of laughter & music.
Live and interactive virtual comedy show complete with a visible and audible audience (if you're shy you can switch your camera off!).
You can be anywhere in the country (or even the world!) and join us virtually. All you need is WiFi.
For group bookings of four people or more, bring your friends all together across the country ( or world!) for a pre - comedy drink and chat in our 'private booths' with pop-in live songs from incredible piano man Marky Dawson and Ukulele player Tony Ukulele.
Venue : Online via Zoom Live Visible & Audible "Front Row" Audience. The Best Night Out you can have on your sofa!!!
All for only £10 per person - book now to avoid disappointment!
The best Zoom call you'll have this year!!!
Rosie Jones (As seen on BBC’s Funny Festival Live, Live at the Apollo , Mock The Week, Channel 4's The Last Leg & more) Tez Ilyas ( BBC's Live At The Apollo, Mock the Week & more) , Sikisa ( ITV's "Jonathan Ross’ Comedy Club",Olga Koch (BBC's Mock The Week & more).Allhosted by "Utterly charming" (Time Out London) Siôn James.
Rosie Jones
With her infectious laugh and high energy, Rosie Jones has quickly become a must-see act on the UK comedy circuit. As seen on BBC's Live At The Apollo,Mock The Week,ITV's The Jonathan Ross Show, Channel 4's 8 Out Of 10 Cats, 8 Out Of 10 Cats Does Countdown, The Last Leg, Rosie Jones Tries To Help,, Comedy Central UK’s Roast Battle & much more.‘Debut comic Rosie Jones is completely brazen, downright hilarious and will leave you snorting with laughter’Ed Fest Mag‘Fresh, mischievous and utterly charming’The List.‘It’s rare to see a comedian who exudes such joy’ Chortle

Tez Ilyas
Tez has appeared on BBC's Live at The Apollo , Mock the Week , Man Like Mobeen, LOL Network's Kevin Hart’s Live from Montreal , Channel 4's The Great British Bake Off: An Extra Slice & much more.Tez fronted his own Channel 4 satirical sketch series The Tez O’Clock Show to huge critical acclaim.Tez’s hotly anticipated debut novel The Secret Diary of a British Muslim Aged 13 3/4, a teenage memoir, will be released on April 8th 2021.“Blackburn-born Ilyas has a slickness more reminiscent of US comics, and the gags to back it up, though his most prized asset could yet be his bold, subversive streak” (The Guardian).‘Radiantly entertaining.’The Times

Sikisa
From South London, Barbadian citizen Sikisa has become one of the most exciting acts in the UK, having delighted crowds with her fearless and vivacious personality and immediate warmth and likability. She won the public’s vote in the 2017 BBC New Comedy Award competition, for which she was a finalist. Since then TV appearances include ITV's Jonathan Ross’ Comedy Club , CBBC's The Dog Ate My Homework & Comedy Central's Pie And A Pint.

Olga Koch
Russian Comedian described as "a hybrid of a John le Carre novel and an episode of Black Mirror" by Bruce Dessau of The Evening Standard. As seen on BBC's Mock The Week, heard on Radio 4's The Now Show, & much more.
MC Siôn James"Utterly charming ... Lovable giant' Time Out London
"great host, his shows always have a friendly, fun atmosphere and are a welcome distraction from life in 2020!!" Virtual Audience Member

With special live music guests Marky Dawson - our pocket sized charismatic piano man & Tony Ukulele who will pop in to the pre-show private booths for groups and take song requests.
Acts shown are correct at time of going to press, in the unlikely event that an artist needs to cancel, we reserve the right to change the line-up without notice.

Advanced Tickets
Each Ticket is £10 + booking fee per person.

After you've bought your ticket you'll be emailed a private closed Zoom link on the day of the event. All you need is an internet connection plus a computer, laptop, tablet or phone to access the link.

Group Reservations
If you're buying four or more tickets for a group please email nicenspiky@gmail.comas soon as possible to reserve your virtual 'private room' for 7.45pm to 8.45pm with pop in live music before the comedy starts. Please note there are a very limited number of booths on sale and they'll be available on a first come first serve basis.

If you're buying four or more tickets for a group please email nicenspiky@gmail.comas soon as possible to reserve your virtual 'private room' for 7.45pm to 8.45pm with pop in live music before the comedy starts. Please note there are a very limited number of booths on sale and they'll be available on a first come first serve basis.

7:45pm Early Arrivals for Group Bookings of Four Or More

Loved it great atmosphere and lovely break out room