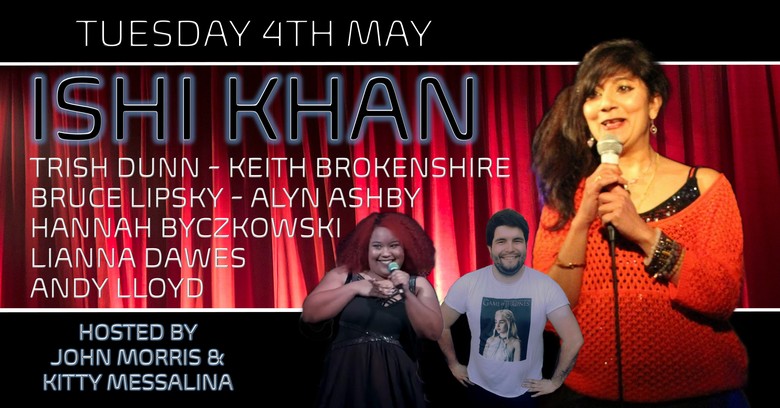 Our fantastic line-up on 4th May is as follows:

Funny Women’s best show award nominee, Ishi Khan has been making people laugh since her birth; when she came out crying, everyone was laughing. Her comedy CV began when she founded 2 Funny Comedy events in 2008.

Currently developing her 4th Solo show, “Love is dot dot dot” she’s also touring her 3rd solo show, “I’mMigrant!” Ishi responds to current affairs through themes of unity, freedom & equality. She aims to shift perspectives, challenge prejudice and sprinkle light-heartedness. Ishi is a sentient being born to tickle, play and sing to the moon. Skipping along on the comedic yellow brick road, dancing through rain, snow, sun and wind. Rainbow lover, unicorn rider. One day she hopes to do a cartwheel and ride a bike; not at the same time. She speaks English, Punjabi and fluent Cat.

After a 35 year career in the fitness and wellness field, Bruce is well positioned to know that laughter really is the best medicine. Bruce’s stand up has been seen at Dangerfield’s, The Broadway Comedy Club and The Comic Strip Live in NYC as well as Governor’s, The Brokerage and My Father’s Place on Long Island.

A stand up comedian ventriloquist performing in both the US and the UK.

He says “I've never heard of you either, but we can still have a laugh"

Character and musical comedy from Clare Jarvis, with a lot of chat and banter followed by an original song or two!

Characterised as “Mr Grumpy”, Alyn is a storyteller who says he “always gets the sh*t end of the stick”.

Keith has performed all over the world maintaining Covid-19 restrictions by performing at home on zoom without the aid of any trousers; flying by his pants. He has performed live on stage in London and Plymouth with his pants on.

Kitty Messalina is a triple threat - a queer woman of colour. Her unique perspectives on prejudice, promiscuity and polyamory quickly earned her a nomination as a Finalist for the NCF New Act of the Year Award 2019. With anecdotes about political foreplay, accidental threesomes and lesbian sheep, delivered with "an honesty and vivacity" (Notts Comedy Review), she’s excited to kick off this platform for new acts and new material.

John Morris is absolutely no threat - a straight white man. John’s an improviser and a comedian from Nottingham. He also hosts the task-based panel show ‘Larklord’ for MissImp: Improv Comedy Nottingham. He’s also relatively excited about Late Stage Comedy, though he wrote this after designing all the posters, so who knows?

Pay What You Want

Pay What You Want Ticket to help support the show. Please donate as much as your are comfortable paying. Money is split between the acts.