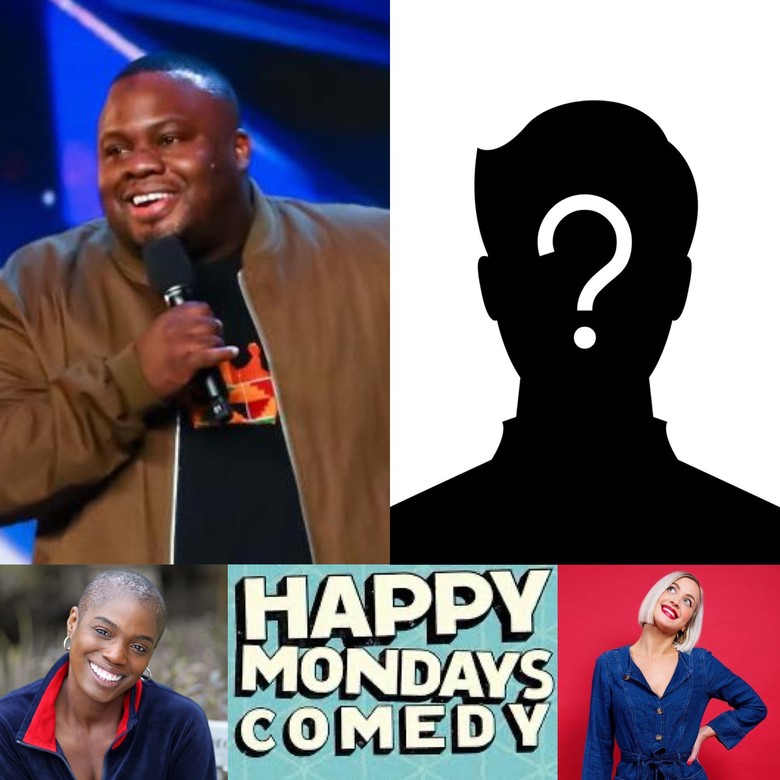 Happy Mondays Comedy Lockdown2 Virtual Live Zoom Special Advanced Tickets £6 : Best Seat in The House-Your House!Once you buy a ticket, Please set up a free Zoom account ( its easy peasy- simply setup account here https://zoom.us) .When the show’s about to start, the link to join will be released so you can attend the online gig.
Please email happymondayscomedy@gmail.com before 7.30pm on day of the show if not receivedZoom link & PasswordPlease log into Zoom App and click the direct link Or can join with the Meeting ID & Password.Spaces are limited so please book tickets for the secret Zoom link - Please do not share the link
Together we can make it as close to the magical live experience of a comedy club as possible.
This is an 18+ event.
Advanced Bargain £6 Tickets available Online
For information on reservations please contacthappymondayscomedy@gmail.com or please text 07734805817Spaces are limited so please book tickets for the Zoom link.

Nabil Abdulrashid
Nabil recently competed in the 2020 series of Britain’s Got Talent, enjoying a triumphant run to the competition’s final, drawing praise from the show’s judges for his hilarious and uncompromising brand of stand-up comedy. Awarding Nabil the coveted ‘Golden Buzzer’ in the first round of the competition, Alesha Dixon praised his “edgy, charismatic” style while David Walliams described both his performance and writing as “perfect”. In a piece suggesting Nabil should have won the competition overall, the Sunday Telegraph described Nabil’s performance in the final as “urgent, uncompromising and refreshingly radical fare, smartly woven into a gag-packed set.”Before appearing on BGT, Nabil had already carved out a unique, exciting and varied career in UK and international comedy. Within a year of starting to perform, he had already written, starred in and directed his own sketch show on Channel U and was also joint winner of the Which Religion Is Funniest? competition, judged by UK comedy legends Omid Djalili and David Baddiel. Triumphing over a number of more experienced comedians in the final of the latter, Nabil won the opportunity to perform at London’s prestigious Hammersmith Apollo, becoming the youngest ever black stand-up to do so and has toured the UK with his show Don’t Panic, I’m Islamic!Nabil also co-hosts his own podcast, I Am Not Your Bilal, which is available to stream on Spotify.

Thanyia Moore
South East London's finest .In 2017 she joined the likes of Katherine Ryan, Sarah Millican & Desiree Birch when she was crowned Funny Women Champion, Beating over 400 women in the process. As Seen on Mock The Week , Comedy Central . C4 & more
Lily Phillips

Runner Up at the 2019 Leicester Square New Comedian of the Year."Charming and moderately obscene." (The Scotsman)As seen on The Stand Up Sketch Show for ITV2, JOMO for All4, and has performed on Comedy Central

*Special Secret Guest who cannot be named
*As seen on various television & radio shows eg Live At The Apollo & more...A celebrity comic whose name cannot be publicised. It may be a huge star or a familiar TV name who is road-testing new material

Spaces are limited so please book tickets for the secret Zoom link - Please do not share the link
Together we can make it as close to the magical live experience of a comedy club as possible.
Acts shown are correct at time of going to press. Mgmt reserve the right to change the line-up without notice.

Lovely atmosphere, great comedy and what a way to start the week! Thanks for cheering me up 😊

Awesome night! Great comedians and lots of laughs from the comfort of my own home. Can’t wait for next week!