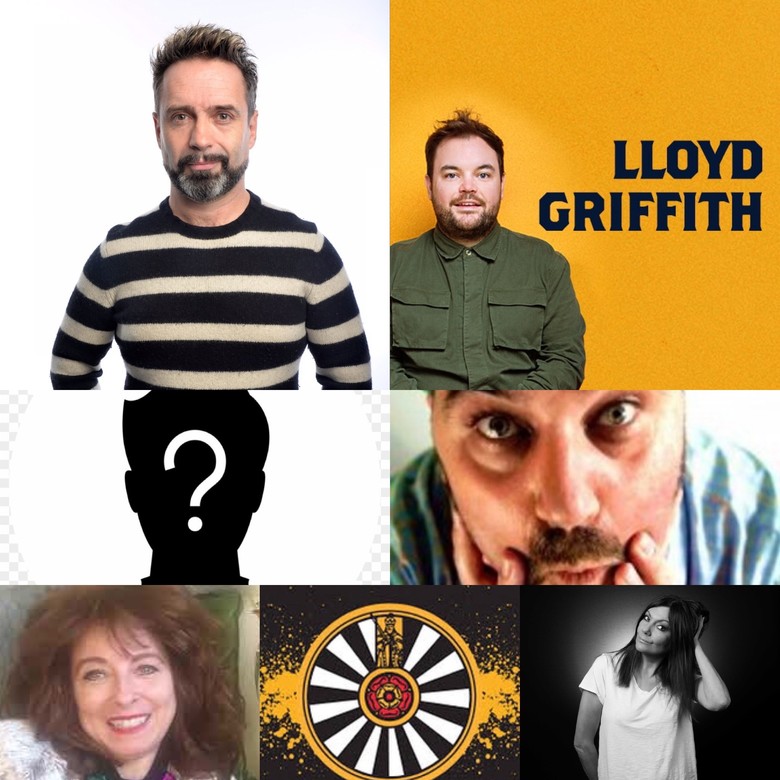 Laugh your Way Through Lockdown with Top Comedy presented by Collywobblers Comedy.

Come Join us for some brilliant evening of live comedy beamed directly to you via Zoom, grab yourself a drink ( s) and and keep the good vibes flowing for awesome comedians.

Ellon Round Table have teamed up with Collywobblers Comedy Club host Siôn James and are very excited to bring you fantastic lineup of comedy talent including the legendary comedy force of nature that is Phil Nichol, Lloyd Griffith ( Sky Sports Soccer AM, Netlfix, Comedy Central & more) *Special Secret Guest who cannot be named ( Huge Star of Live At The Apollo & more!) Fiona Allen- star of Mock The Week & Smack The Pony , Brabantia- The League of Gentlemen meets Neighbours plus special guest live music from Tony Ukulele all hosted by "Utterly charming" Siôn James beamed directly live online via Zoom to the comfort of your own home.

Techie bits n bobs :
Once you buy a ticket, please set up a free zoom account ( its easy peasy- https://zoom.us) Secret Zoom link before will be your ticket so you can attend the online gig.Please, please, please do not share the link as attendees are limited numbers and we want to make this a bespoke live experience for you all. Plus we need money to pay the acts who have lost months of work due to the current situation.
Profits are donated to Ellon Round Table Charities The Show starts 9pm. We'd advise logging on to Zoom at around 8.45pm or earlier so you can tweak any tech bits and can grab a drink and chill before the fun starts

The online comedy gig is a new experience for most of us , as you can imagine there will be unpredictable tech issues just like a live comedy gig!

Profits donated to Ellon Round Table's charity - local community resilience groups that are helping vulnerable members of the community.

Phil Nichol
Phil Nichol is a truly unique performer. An acclaimed actor, award winning comedian, producer, presenter, writer and musician, there is no end to his talent! His skill as an improviser whether it be musical, comedy or straight is unparalleled.In 2019 Phil toured his hit Edinburgh Fringe Festival show "Your "Wrong globally and starred as Loco Chanelle in West End smash production "Everybody's Talking About Jamie"

As seen on The Graham Norton Show, Never Mind The Buzzcocks, Altitude Festival , Annually Retentive, The World Stands Up, Comedy Shuffle, and many more.

Lloyd Griffith
Lloyd is a comedian, a professional choirboy and star and star of many TV showsYou may have seen Lloyd on Soccer AM on Sky Sports and also as the co-host of FLINCH on Netflix. Other TV credits include 8 Out Of 10 Cats (Channel 4), Bounty Hunters (Sky), Comedy Central Live at The Comedy Store (Comedy Central), Roast Battle (Comedy Central), Drunk History (Comedy Central), Taxi To Training (BBC3), Football’s Funniest Moments (Sky), The Premier League Show (BBC2),

'Inherently funny: voice of an angel' body of a trucker... very neat lines in his comic repertoire' (Chortle.co.uk)

Star of  the Emmy award-winning Smack The Pony. As seen on Mock the Week and 8 Out Of 10 Cats , Coronation Street & Eastenders

Acts shown are correct at time of going to press. Mgmt reserve the right to change the line-up without notice

Other Information:Please setup Zoom Account in advance and click on the link at 8.45pm ( We will email you the password before 7pm on the 12th June )

Excellent night, would certainly recommend it to friends.

Great way to try and reach people during lockdown. Good fun. Flowed really well. A surprise ‘big’ nane in comedy, which was a great bonus. Most of the comedians were great , it can’t be easy doing a routine this way ,so think they all did good compare was fab in his role and brought it all together ! Would definitely attend another. Great value for money. Actually felt like we had been out! Just not out out.

Amazing show Sion! Fantastic acts! Sore cheeks from laughing all evening! Thank you for everything!