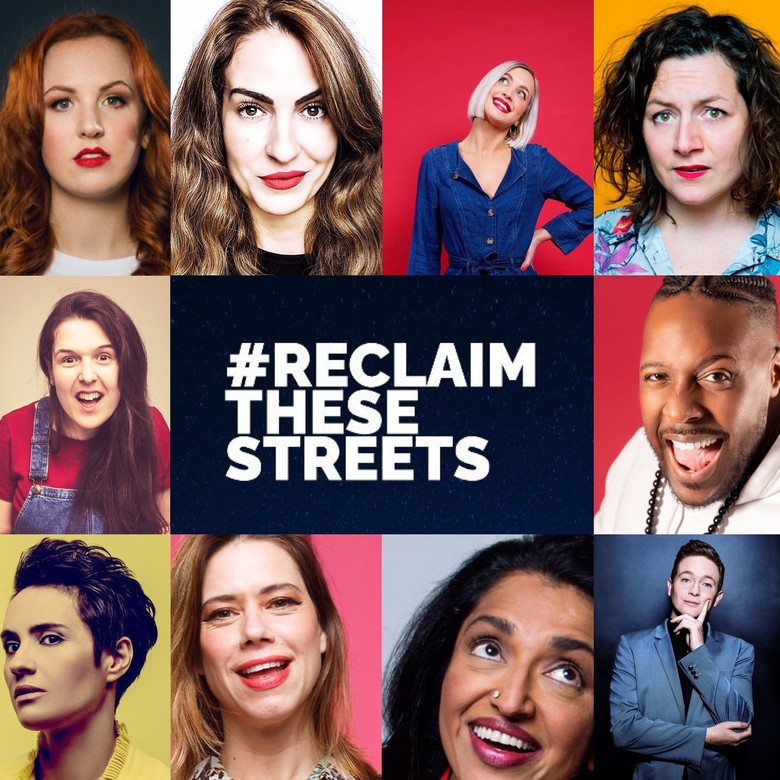 Please join us on Sunday 11th of April at 8pm for an epic all star line up of comedians will making us all laugh till we cry and help raise money for Reclaim These Streets. Open to all, public fundraiser. All proceeds will go to the crowdfunding page with Reclaim These Streets who will distribute the money to various women's charitable causes.

Book Advanced Tickets £10 (Per HouseHold ) for Online Tickets via Zoom  :

Come Join us for some brilliant evening of live comedy beamed directly to you via Zoom, grab yourself a drink ( s) and and keep the good vibes flowing for awesome comedians. Please laugh loud as the comedians need to feel your love n laughter and help raise money for a worthy cause.

The Show starts 8pm. We'd advise logging on to Zoom at around 7.45pm or earlier so you can tweak any tech bits and can grab a drink and chill before the fun starts The online comedy gig is a new experience for most of us , as you can imagine there will be unpredictable tech issues just like a live comedy gig! Thanks for your support and love 'n laughter and stay safe and healthy

Jen Brister
Jen Brister is a critically acclaimed stand up comedian & writer who has been seen on BBC’s Live at the Apollo, Frankie Boyle’s New World Order and  on Hypothetical and Sara Pascoe’s comedy Lectures on Dave. Jen’s sell out show ‘Meaningless’ can be streamed on Amazon Prime, NextUp or Soho Comedy.

Lou Sanders
As seen on Taskmaster, QI, 8 Out of 10 Cats Does Countdown, Hypothetical, The Russell Howard Hour,Ultimate Worrier & more. ‘A comedian who leaves you wanting more’ The Times '.crazy off-beat surrealism' The Independent

Sindhu Vee
As seen on BBC's QI , Live AT The Apollo, Have I Got News for You, Mock the Week & ITV's Jonathan Ross Show...Host of BBC Radio 4’s Comedy of the Week podcast, nominated for the Edinburgh Comedy Award for Best Newcomer, heard on Guilty Feminist podcast.

Rosie Jones
With her infectious laugh and high energy, Rosie Jones has quickly become a must-see act on the UK comedy circuit. As seen on BBC's Live At The Apollo,Mock The Week , ITV's The Jonathan Ross Show, Channel 4's 8 Out Of 10 Cats, 8 Out Of 10 Cats Does Countdown, The Last Leg, ‘It’s rare to see a comedian who exudes such joy’ Chortle

Aurie Styla
Star of BBC Radio 1Xtra  Host of BBC London "The Scene " with Aurie Styla is funny and informative - speaking to Londoners from all backgrounds about the cultural and entertainment scene in their communities, whilst touching on relevant topics.

Jessica Fostekew
Star of BBC's Live At The Apollo , Motherland and Cuckoo BBC/ Netfli. Regular co-host of the behemoth The Guilty Feminist. Guardian say she “wears her smarts on her sleeve, great stuff” and Fest called her “consistently hilarious.”

with your MC's & Hosts

Esther Manito
As heard on BBC Radio 4, “Esther Manito: Lebanese British woman, wife, mother, incredible comedian.” Edfest Magazine
'A lot of hair and a lot of talent' (BeyondTheJoke.co.uk). 'Gritty reality... Esther tells it like it is' (FunnyWomen.com).
The first Female Comedian to perform at Dubai Opera House, Esther returned to Dubai in January 2021

Lily Phillips
Runner Up at the 2019 Leicester Square New Comedian of the Year. "Charming and moderately obscene." (The Scotsman)
As seen on The Stand Up Sketch Show for ITV2, JOMO for All4, and has performed on Comedy Central,

For Info on Reclaim These Streets :  https://reclaimthesestreets.com

What an amazing night of top class comedy and for a great cause.