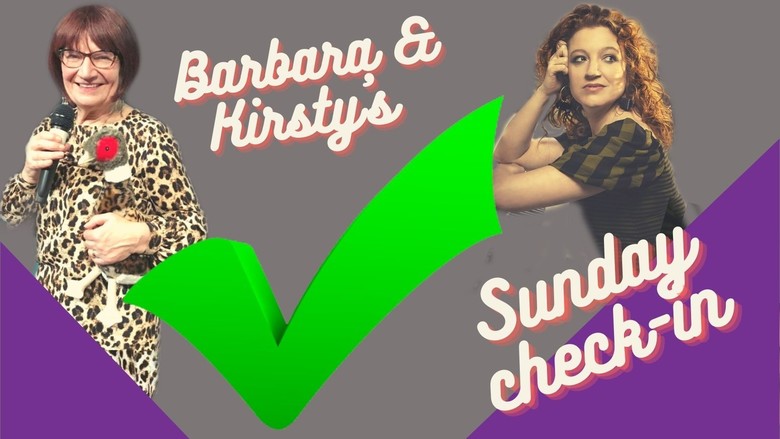 Whatever got you through the week kids, we want to know!

Friendly, fun, Sunday night get-together with games, singalongs and top tips for making the most of things.

Barbara and Kirsty want to know what you’ve been doing over the week to keep you going
get your phones out and make a short film up to 120 seconds - two mins max
and send to us at livinlavidalockdown@gmail.com

A fun hour for all the family. Check in with Barbara and Kirsty and the Zoom audience as they share their weekly round-up of what’s been happening to them.

Expect to feel better in yourself after this interactive, fun and friendly hour of games, singalongs and sociability.

After the 5-star success of Barbara Nice's “Havin' A Piggin' Lockin“ online Zoom shows that made everyone’s Saturday night in lockdown one, and “Bubble With Barbara“ in lockdown two, lockdown three brings “Barbara & Kirsty’s Sunday Check-In”. Doing what it says on the tin! It’s good pals Barbara and Kirsty checking in with each other on a Sunday night to see how we are all doing. Set yourself up for next week by havin' a laugh.

“Unflaggingly positive and gregarious, she’s a super-spreader of good cheer, uniting the audience in silly games and cheeky in-jokes."Steve Bennett, Chortle Jan '21 Most memorable gig of 2020

“Even over Zoom you manage to make an audience of strangers feel like we’re doing something together. Really uplifting. I look forward to seeing what you do next. x”★★★★★ audience member


A bit about Barbara:

Barbara Nice is a much loved comedy circuit headliner and Edinburgh festival veteran, garnering 5 star reviews for her solo shows that also tour venues all over the country. She starred in her own very popular Radio 2 sitcom and her podcast 'Barbara Nice & Friends', in which she has wide-ranging chats with a huge variety of people, is currently climbing the podcast charts.
Barbara Nice is the comedy creation Of Janice Connolly BEM. Like Barbara, Janice is twinned with Stockport and Kings Heath, Birmingham.She is the Artistic Director of Women and Theatre. TV credits include playing God-fearing barmaid Holy Mary in Phoenix Nights. Live theatre includes Tartuffe and Anita and Me at Birmingham Rep, plus A Taste Of Honey at the New Vic Stoke and Panto with Lily Savage in Manchester and Bristol. Last year, Barbara was a semi-finalist in ITV's Britain's Got Talent.


A bit about Kirsty:

Kirsty Newton is a multi-talented musician, singer, songwriter, musical director and comedy performer. She performs around the world with a huge variety of wonderful artists from the worlds of music and comedy, wearing many different hats and showcasing her versatile skills. Her hugely popular Kirsty's Poptastic Piano Singalong show continues to lift audiences' spirits online. Credits include Whose Line Is It Anyway?, Paul Merton’s Impro Chums, Arthur Smith, Massaoke, The Comedy Store Players and Al Murray's Great British Pub Quiz.

“She should be employed by the NHS to raise the spirits, the heart rate and help everyone rediscover their will to live” ★★★★ – Chortle"A wolf of a musician, in the sheep's clothing of an entertainer" ★★★★★ - audience member

'Barbara & Kirsty's Sunday Check-In' will be hosted on Zoom, with tickets available up until Sunday 24th January at 5pm.
The show is family-friendly and includes singalongs, fun and games, a bit of chat and some lovely audience participation.Places are limited so book early. You will receive an email on the day of the event with your Zoom stream link .Please be aware that Zoom software will need to be in place on your PC/Laptop/Tablet in order to join in the fun.
We recommend using a PC/Laptop/Tablet for the best show experience.
The virtual doors will be open at 6.30pm with the show starting at 7.00pm and ending at 8.00pm.
We wanted to give everyone plenty of time to get settled and ready for the show xxx