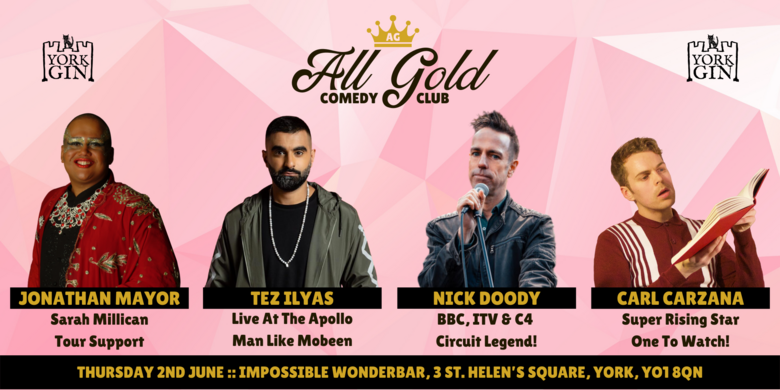 All Gold Comedy Club on Thursday 2nd June... and it's another brilliant lineup of TV and award winning comedians!

Join us at Impossible York in association with York Gin!

MC Jonathan Mayor
One of the very best in the business, Jonathan is a master of crowd work and the flamboyant. Multi award winning, loved by all, tour support for Sarah Millican.

‘Ilyas has a slickness more reminiscent of US comics, and the gags to back it up, though his most prized asset could yet be his bold, subversive streak’The Guardian

Nick Doody
Nick Doody has been performing comedy since the 90s when, as a student, he got off to a pretty good start by supporting the legendary Bill Hicks, at Bill's request. A little later, Nick was a finalist in Channel 4's So You Think You're Funny? competition.

Since then he has performed all over the world: Ireland, France, Spain, Switzerland, Germany, The Netherlands, Dubai, United Arab Emirates, Qatar, Hong Kong, Thailand, Malaysia, Estonia... You get the idea. He was the first British comedian to perform in Croatia.

Carl Carzana
A brilliant break through act that we are proud to be championing. Carl has a calm and relaxed manner on stage backed by killer punchlines and poetic observations. Definitely one to watch!

With a show of this quality we are sure to sell out early - so snap up your tickets, tell your friends and get down for a fabulous feast of funny!