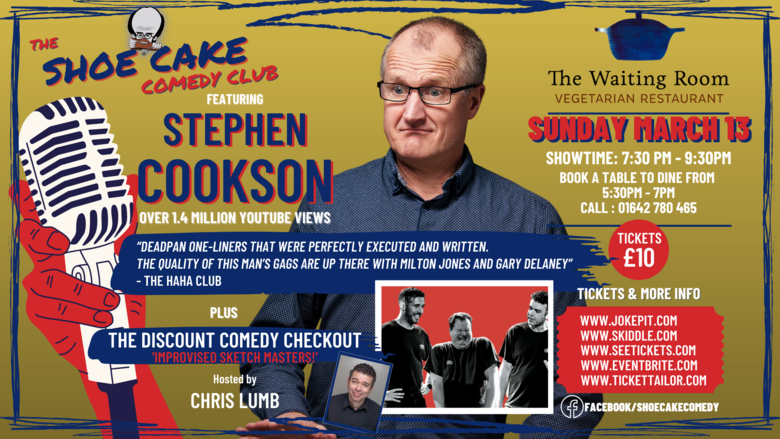 Join us at The Waiting Room, Eaglescliffe for a superb night of stand up comedy !!

Stephen is based in the North West of England was the World One Liner Champion of 2019.

His 6 minute spot at Hot Water Comedy Club, Liverpool, in October 2017, currently has over 1.4 million views on Youtube!

He is a clean, deadpan comedian with quirky one liners and dry observations.

Winner Barnoldswick comedian of the year 2016.

Runner up Nando's new comedian of the year 2015.
Quotes:

"Old whippersnapper and worryingly funny. Frankly I hope he stops doing comedy before he costs me work"
- Gary Delaney
“Stephen Cookson has some of the finest crafted one-liners on the circuit today. He also possesses a finely tuned comic timing way beyond his experience as a newer comic"
- Phil Walker
“Deadpan one-liners that were perfectly executed and written. Had one lady hyperventilating and begging for him to stop. The quality of this man’s gags are up there with Milton Jones and Gary Delaney”
- Bryan Malcolm (The Haha Club)
“A masterclass in one liner comedy” Rick Hulse


Opening the night with two sections of improvised sketch comedy is ....

If you've never seen improvised comedy before, you are in for a right treat. All the games, scenarios, and situations are formed and created from your suggestions ... that's right YOU the audience.
It's very much in the style of 'Whose Line is it Anyway' but with a modern twist .... and normally a little risker and ruder too.


"The comedy is creative and crude, quick and quirky, the performers commit completely to the games and create funny & fantastic characters at a moment's notice" - ★★★★★ - Remotegoat


"There's a wonderful slapstick nature to it all but they are all impressively literate in film culture and genres too, creating brilliant, quick draw pastiches of popular cinema that will have you in stitches"- ★★★★ Manchester's Finest


Our MC for the night is the naturally funny and entertaining CHRIS LUMB.As seen on 'Russell Howard's Good News' & 'Britain's Got Talent' Chris is a popular MC on the comedy circuit with his warm and welcoming crowd work, sharp impressions, and quick fire wit.

The Waiting Room is a multi award winning vegetarian restaurant in Eaglescliffe near Yarm.

They’ve attracted regular awards and commendations over the years, being included in The Observer Food Magazine’s Best UK Restaurant category in at least five of the past ten years, and winning the Best Restaurant in the UK award from the Vegetarian Society.They have also been included in “Top 10” lists for The Telegraph, The Times, MSN and BBC Good Food. and been awarded certificates of excellence by the Slow Food Movement, Stockton Fair Trade, and visitor review sites such as Trip Advisor (and they don’t pay these sites like some restaurants do). The Waiting Room hosts regular gigs and arts events on a Sunday night, and – over the past ten years they have welcomed some incredible artists, most notably comedians Stewart Lee, Josie Long, John Bishop, Simon Donald, Simon Munnery, Boothby Graffoe, Alex Horne, Simon Donald, and Pete Firman.

Show your ticket on your phone or print out and show

Comedy doors open 7:00pm
Show starts at 7:30pm
Finishes at approximately 10:00pm
There will be 2 drink intervals between acts

NB: Line up subject to change at short notice.
Event can be postponed or the capacity reduced at short notice if instructed to by localised restrictions or weather related reasons.
Please follow all government guidelines and also respect the house rules when attending the show.

The show may contain occasional strong language and topics of an adult nature.
If easily offended it may not be for you.
Over 16's Only.