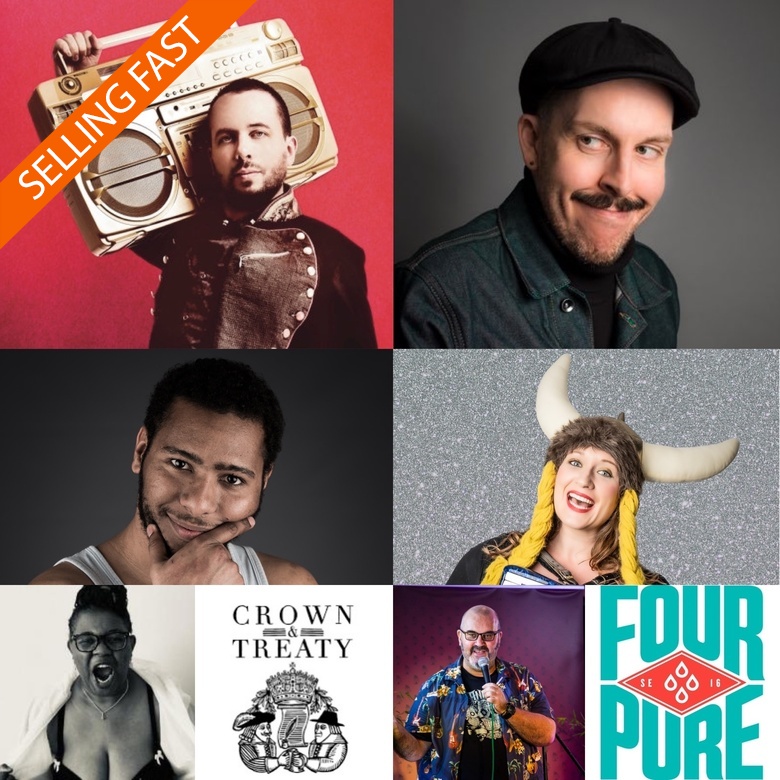 We always have a fantastic lineup of comedy talent providing the lols and previous shows have sold out so please book your ticket early so you don't miss out on an epic fun packed evening of live comedy!

Come Join us at The Crown & Treaty for a brilliant evening of live comedy - Bargain Tenner for Great Comedy & A Free Beer!
Snap up tickets early as limited capacity and these always sell out fast!

This month's comedy line up includes the amazing Irish improvised hip hop comedy from the legendary Rob Broderick, A.K.A. Abandoman. "Flight of the Conchords meets 8 Mile. Nothing short of genius" Chortle.co.uk , hilarious comedy talents of Carl Donnelly - Star of Mock The Week, Dave TV & Two Vegan Idiots Podcast, “Observational genius” - The Guardian, plus Madame Chandelier brings her super fun Opera House Party to Uxbridge along with promising newbies Maclarry and Mr Lorraine all hosted by your cheeky charming MC Sion James in the friendly atmosphere of The Crown & Treaty.

Abandoman
Ireland’s finest improvised hip hop musical comedian, Rob Broderick, a.k.a. Abandoman.
"Flight of the Conchords meets 8 Mile. Nothing short of genius" Chortle.co.uk
As seen on Channel 4 as house band on Alan Carr's Happy Hour,  8 Out of 10 Cats Does Countdown, as well as supported and toured with pop behemoth Ed Sheeran.  “Broderick has us in the palm of his hand from the minute he starts until the very last mic drop” ★★★★★ Broadway Baby
'A proper party. raucous, expansive and relentlessly hilarious' (The Times).

Mr Lorraine
Mr Lorraine is a female comedian with an unusually deep voice. Accused of being a fraud and also attempting to impersonate the ?real Lorraine? she has turned her experiences in a comedy act

Cracking night as usual thoroughly recommend to anybody reading the reviews deciding if to go, just book your tickets .👍

Great night out and best place to be on a Monday

Sion James always a great host. Live comedy can be a bit hit and miss but always a good night out & happy to support new acts