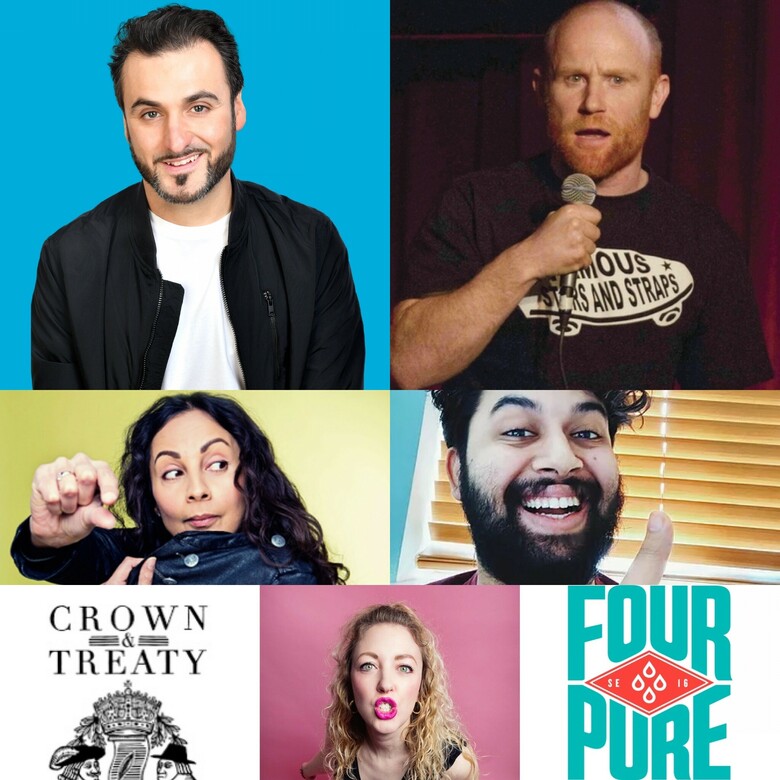 Collywobblers Comedy are very excited to bring a new comedy club at The Crown & Treaty Uxbridge.

We are operating the event strictly in accordance with the Government’s guidelines and our experience of hosting a variety of events over the last 22 months to help you have a safe and enjoyable visit with some of the procedures previously in place to reduce transmission risk.

The Crown & Treaty Uxbridge is a beautiful historic pub which has been hosting amazing events since 1645.

Patrick Monahan
Irish-Iranian Geordia Patrick Monahan tours both nationally & internationally, playing in countries across Europe, The Middle East, America, and Australia, including performances over 16 years at the Edinburgh Fringe.As seen on BBC1 & 2, ITV1 & 2, Channel 4, Channel 5, and Sky 1, Patrick was the winner of ITV’s ‘Show Me The Funny’, as well as competing in ‘Splash’ and ‘Celebrity Squares’. He has also recently been seen on The One Show (BBC), Fake Reaction (ITV), and Pointless Celebrities (BBC).

“Rip roaringly funny... fun! ” – ★★★★★ – One4Review
“Possesses the rare ability to be hilarious without being outrageous” – ★★★★★ – Three Weeks
“Terrific comic... His overwhelming warmth makes this a truly delightful hour” – The Scotsman

Rory O Hanlon
Award-winning Irish comedian Rory O'Hanlon Starred @ Moscow Irish Comedy Festival alongside Dara O Briain & Ed Byrne.
Described by Chortle.co.uk as having 'presence, poise and timing' and by the Irish Times as having 'a joke every 30 seconds',

Runi Talwar
Having recently moved from Sydney to London, Runi is an incredibly exciting up and coming comic and writer ( credits include BBC 's "Have I Got News for you?" & Radio4's Now Show) Last year, he won the British Comedy Guide/Yellow Door Sitcom Competition, reached the final of the Amused Moose New Act Competition 2020 and was a finalist at the 2Northdown New Act Competition 2020.