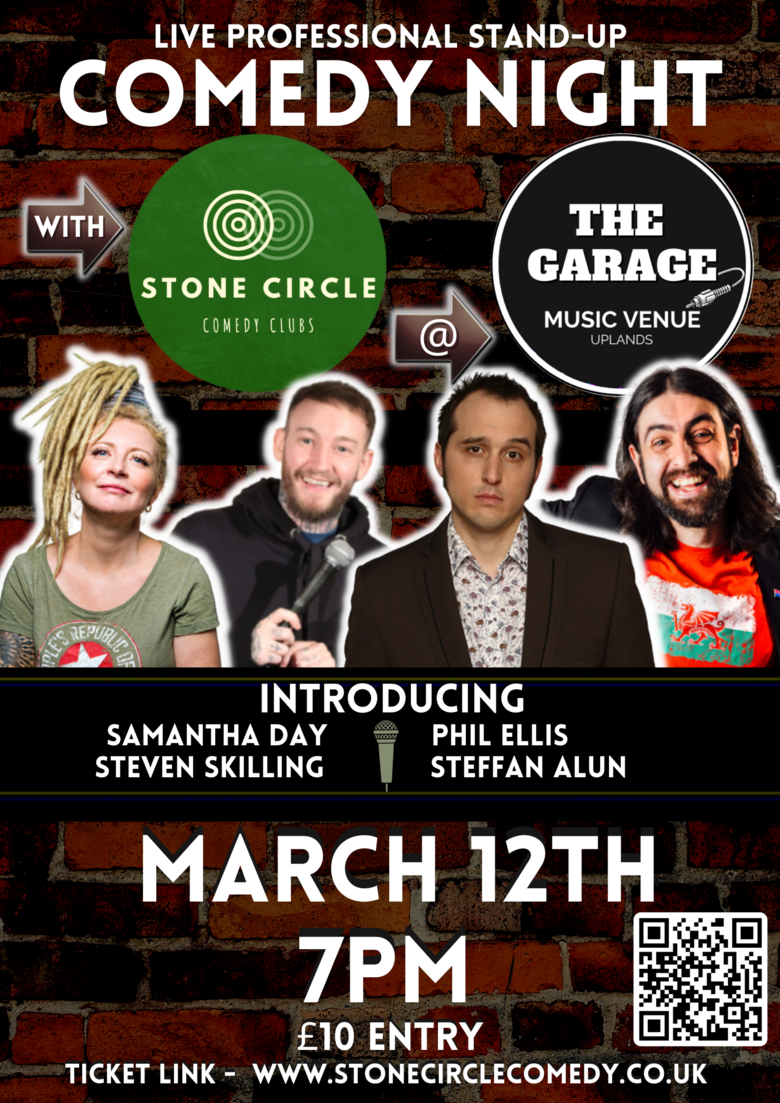 We are FINALLY back for 2023 with a killer line-up in a new killer venue!  So come and join us for a full professional line-up of hilarious comedy.

Our acts are as follows…Our Opener is -

Samantha Day is new to the comedy circuit but already making waves. She has quickly established herself as a force to be reckoned with on the UK comedy scene with her performances being met with rave reviews from promoters and audiences alike.

In 2022, Day won the Comedy Store King Gong, as well as the title of New Comedian of the Year at the Southport Comedy Festival. Additionally, she was a finalist for the same title at the Leicester Square New Comedian of the Year competition. These achievements, coupled with her consistently strong performances, have propelled her to become a solid professional act, now performing regularly at many of the top comedy clubs in the UK.

Our middle act is –

Scottish comedian Steven Skilling is a highly talented performer who first began his career in Wales in 2012. Since then, he has had the opportunity to travel and perform all over the world, including in countries such as Japan, Hong Kong, Turkey, and the United States.

Skilling's unique brand of comedy, characterized by his cheeky nature and his observational humor, has made him a popular and in-demand act on both the UK and international comedy circuit. He is known for his sharp wit, clever observations, and his ability to deliver a polished and polished performance every time he steps on stage. With his years of experience and his undeniable talent, Steven Skilling is a comedian that is sure to leave audiences laughing and entertained.

"If you get the chance to see this act, Jump at it - You won't be disappointed" - Wales Online

"Comparisons with his Scottish counterpart Kevin Bridges are lazy, yet he undoubtedly shares the same instantly likability and astute material as his fellow young Scotsman." - JC Entertainment

Phil Ellis is an award-winning comedian who has entertained audiences of all ages with his amalgamation of off-beat observational material and physical comedy.

Phil won the Fosters Edinburgh Comedy Award’s panel prize in 2014 with his undisputed anarchic sleeper hit of a show Funz and Gamez. After meeting incredible critical acclaim, Funz and Gamez was broadcast as part of Fresh from the Fest (BBC Radio 4), as well as part of BBC Comedy Feeds (BBC Three). The show went on to have an 18-show run at the Soho theatre as well as a further run at the Udderbelly on Southbank.

Phil has written and starred in three series of his radio sitcom Phil Ellis is Trying (BBC Radio 4), with cast including Lolly Adefope, Johnny Vegas, Sean Lock and Lee Mack. The second series was nominated for Best Scripted Comedy (Longform) in the BBC Audio Drama Awards 2020.

‘Ellis sets such a cracking pace… he flits around the audience with his frisky, easy banter spreading a feeling of good-humoured fun’.
Chortle

‘Ellis emerges as a very clever comedian with a deep understanding of the genre’.
The List ★★★★

‘Much cleverer and much more stupid than you might think’.

The doors open at 6:30pm with some brilliant prices on drinks.

Fabulous night, 9 great comedians and stafan was an amazing host as always. Venue has wonderful food and a huge selection of cocktails. Atmosphere is great, I highly recommended a visit.

Lovely little venue, with lovely food and a nice selection of both alcoholic and non-alcoholic cocktails. Comedy was excellent too. :-)

Lovely night, with great food and fantastic comedy. Really enjoyed and we will be booking again in April.