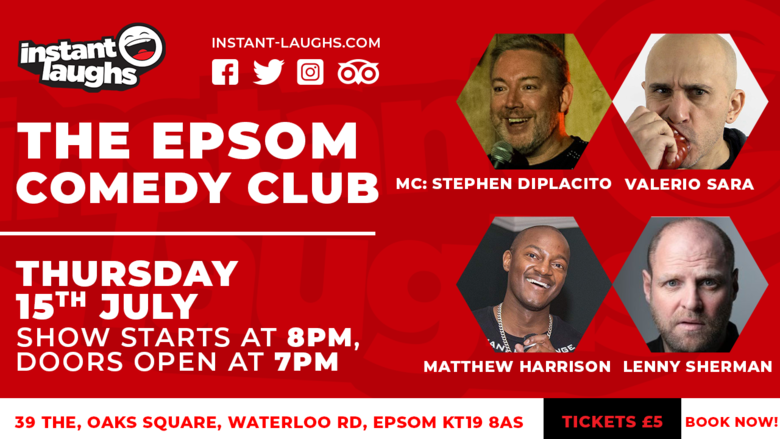 Stand up comedy in Epsom

Stand up comedy at the Dia y Noche lounge, a popular, family run cafe, music and sports bar in Epsom.
Every 1st and 3rd Thursday, we will be welcoming some of the best up-and-coming comedy talent and professional comedians on the circuit.
Gracing the stage will be hilarious comedians Stephen DiPlacito, Matthew Harrison, Valerio Sara and Lenny Sherman.

Matthew Harrison Matthew Harrison is a bold and charismatic comedian who enjoys giving the audience a high energy performance filled with witty observations and silly anecdotes.
With a natural ability to read the room and the confidence to cover risky topics without causing offence, Matthew is becoming a favourite on the London comedy circuit.
Stephen DiPlacitoA veteran of the London comedy scene, who is an amiable, hilarious MC and comedian - who always  seem to have the crowd in the palm of his hand.
Valerio SaraValerio Sarà is an Italian eccentric who has toured his unique brand of surreal stand-up comedy across the UK. He was born in Naples, a city where even driving a car is a pleasurable chaos and an adventurous challenge! His experience of the city's variety and flavours lends a magnificent punch to his set.
"If you have not witnessed Valerio's act before this is a must see! One of the funniest and most surreal acts we have had here at The Secret Comedy Club. We were in stitches."  - The Secret Comedy Club Brighton
Lenny ShermanLenny Sherman is an actor, comic, writer and lovable cockney geezer. As an actor, Lenny has most recently appeared alongside Ant and Dec in several episodes of Men in Brown, as part of Saturday Night Takeaway. He has also performed in the Channel 4 satirical comedy show Ministry of Justice, and recently featured in BBC’s Eastenders as Alex and has appeared in four different sketches for BBC Three Quickies Online. In the world of stand-up he is a comedy circuit veteran with more than eight years of experience performing gigs for Off The Kerb, Downstairs At The Kings Head, Glee and comedy clubs all over the country.