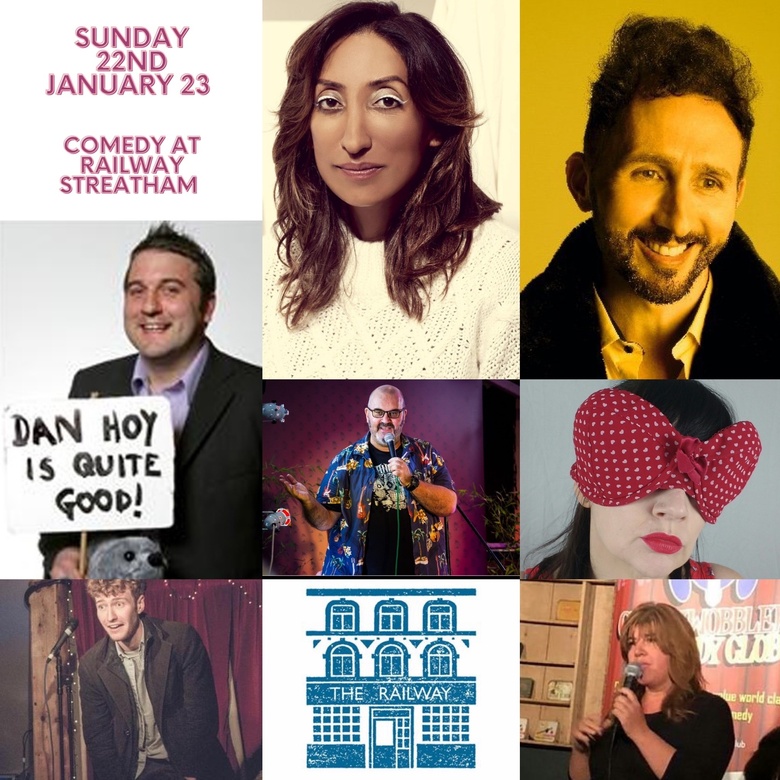 We have a fantastic line up of comedy talent for you including comedy circuit legend and star of tons of TV Shazia Mirza - As seen on BBC's 'QI' & "Have I Got News for You" C4's 'Celebrity Island with Bear Grylls', ITV's Jonathan Ross Show, and C4's Travel Man, BBC2's "Pilgrimage" & more, Nathan Cassidy who The Times declared his show the best show at the 2020 Edfringe! , Currer Ball- Piccadilly New Act of the Year finalist ,brilliantly bonkers Cheekykita, Dan Hoy "King of the One Liners" Time Out London plus local Streatham mum Jo Ostrowska providing the lols, all hosted by your cheeky charming MC Sion James in a friendly cosy atmosphere.

Thanks for supporting live comedy!

Advanced £8 Tickets Available Online OR £10 Cash on the Door. ( Subject to availablity)

Shazia Mirza
As seen on many TV show  ‘QI’ (BBC)," Have I Got News for You?" ‘The Jonathan Ross Show’ (ITV), ‘Rhod Gilbert’s Growing Pains’ (Comedy Central), ‘Celebrity Island with Bear Grylls’ (C4), ‘Travel Man’ (C4), Top Gear (BBC) & much more as well as the ever popular ‘F*** Off, I’m a Hairy Woman’ (BBC). Richard Osman's "House of Games" ( BBC)
Shazia is one of the celebrities appearing in the new BBC series "Pilgrimage: The Road to the Scottish Isles"
★★★★ “Shazia Mirza is provoking laughter and large intakes of breath once again…brave and urgent” THE TELEGRAPH
★★★★ “she’s effective at getting under your skin… strikes a blow” METRO
'Wonderfully life enhancing... Her laconic one-liners represent something quite unique in modern comedy' (The Guardian).

Nathan Cassidy
'THE BEST SHOW AT THIS YEAR'S FRINGE' ★★★★  THE TIMES 2020​, WINNER: BEST SHOW Buxton Fringe & NOMINEE: Malcolm Hardee Award "Such a safe pair of hands...  There's a smart mischief to the material, while his piercingly sarcastic jibes at better-paid entertainers have a touch of the Stewart Lee to them' Chortle.co.uk

Cheekykita
'loud and bonkers, is an anarchic delight, a funny and endearing character , like Les Dawson and tinfoil put through a new millennium blender' -★★★Broadway Baby.Compared to "Vic Reeves Big Night Out" , 'The Mighty Boosh' and Spike Milligan ★★★★ ‘Like The Mighty Boosh on crack.’Broadway Baby

Dan Hoy
"King of the One Liners" Time Out London