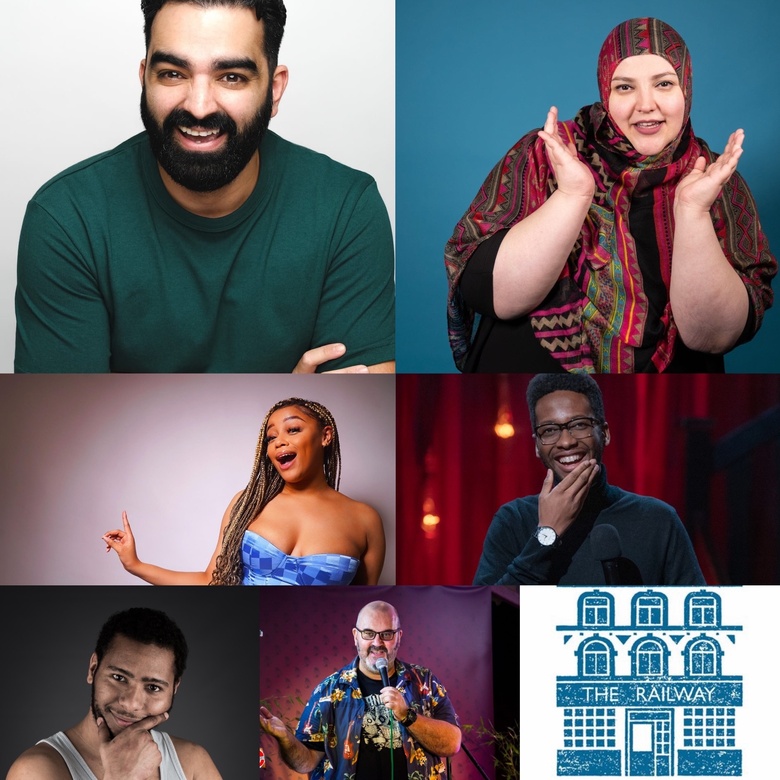 Thanks for supporting live comedy!

Advanced £8 Tickets Available Online OR £10 Cash on the Door. ( Subject to availablity)

Please get there much earlier if ordering food and please call The Railway to book a table for dining.
Please aim to Back Function Room for reserved seats by 7.45pm.

Fatiha El-Ghorri
As seen on The Jonathan Ross Show, The Russell Howard Hour, Comedians V Food, Stand Up Sketch Show, Jonathan Ross’ Comedy Club and Comedy Central at the Edinburgh Fringe, Fatiha is quickly making a name for herself tackling tough subjects like Islamophobia and dating by sharing her own experiences in her own funny and thought-provoking way.

Tadiwa Mahlunge
Welsh Zimbabwean comedian Tadiwa has performed in Berlin, Paris and Amsterdam, comedy clubs across the UK. Winner - The Blackout at Up The Creek 2020 . As seen on BBC 2's Funny Festival Live 2021 , Greenwich Comedy Festival 2021 & 2022.

Kyrah Gray
South London born and raised, Kyrah began her comedy career in 2019 during her last year of University. Her rise on the comedy circuit has been impactful, and so far she has managed to secure some impressive gigs at venues such as : Up The Creek, Backyard Comedy Club, Glee Club and was also the support act for White Yardie’s most recent tour.

Maclarry
Straight outta Cape Town, Maclarry's here to take on the streets of London town with his quirky, observational st