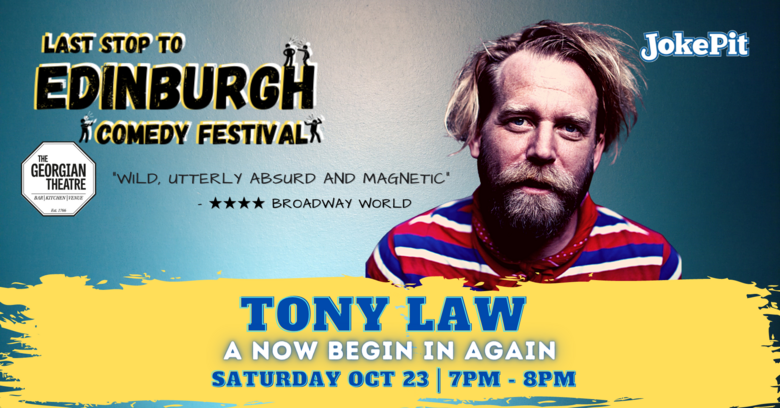 All adult shows at The Last Stop To Edinburgh are Edinburgh Preview/Work in Progress Shows. This is why the tickets are a really good price. Plus you get to see the shows before these amazing acts tour them or take them up to the Fringe and no doubt gain critical acclaim and maybe even win awards

An ageing so called comedian comes out the other end of the plague of Justinian while time traveling and learns absolutely nothing going into our most recent bollockstes. How(sic) is life about?
Wtf was that? anyone dream in Zelda? There really is no point in any of it. Start what again? It was way shitter for way more people than me but that doesn’t stop me feeling sorry for myself. I’ve rotted. Really hadn’t handled that well until I harnessed the power of time travel. Work in pro - gress
I’ll try to be funny for a minimum of an hour but I don’t really know what techniques I’ll use. Probably shouting and then quiet talking and a whole bunch of arseing and clowning.

As seen on Have I Got News For You, 8 Out of 10 Cats Does Countdown, and Never Mind The Buzzcocks.

His 17th show could well be his best yet.  Comedians comedian comedian for the comedy nerd seeking Dadaist nirvosis nirvana blap.

Expect the unexpected as the surreal powerhouse that is Tony Law takes to the stage. He has been all over your TV screens, he has awards, he has loads he could brag about, but most of all, he is on career defining form and is one of the best comics of his generation.


CHECK OUT OUR  DOUBLE SHOW TICKET OFFERS TO SEE THIS SHOW ALONG WITH THE CATHERINE YOUNG SHOW BEFORE OR WITH THE MIKE MILLIGAN SHOW THAT FOLLOWS.

YOU CAN ALSO PURCHASE A TICKET TO ATTEND ALL FOUR SATURDAY SHOWS OR A VIP TICKET TO COME TO ALL SHOWS ACROSS BOTH DAYS.

WE ALSO HAVE KIDS/FAMILY COMEDY SHOWS ON THE SATURDAY AFTERNOON. CHECK OUT THE TICKET LISTINGS FOR MORE INFO.

Line Up:
TONY LAW: A NOW BEGIN IN AGAIN

BAR IS OPEN FROM 4PM
THEATRE DOORS FOR THIS SHOW OPEN AT 6:30PM. THE SHOW STARTS BANG ON 7PM
LATE COMERS MAY BE REFUSED ENTRY.
THIS IS THE 2ND OF 4 ADULT SHOWS THAT EVENING.
THERE WILL BE 30 MINUTES INTERVAL BETWEEN EACH SHOW.