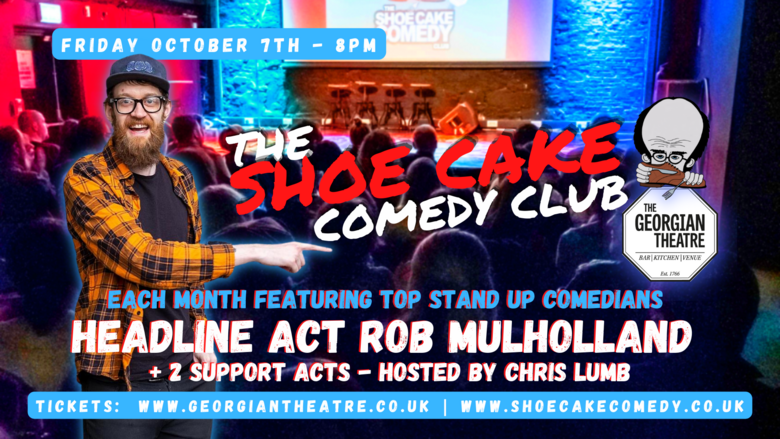 Coming to The Georgian Theatre, Stockton On Friday October 7th
It's the FRIDAY NIGHT SPECIAL of our long running stand up comedy night.

ROB MULHOLLAND
Six foot seven of pure funny, Rob Mulholland is a bombastic, mischievous gag-slinging rascal with a heart full of humour and gob full of sh*te.An established, bullet-proof comedy Pro forged in the fires of the nothern comedy circuit who now travels the world packing big belly laughs.A regular at all the biggest comedy clubs in the UK; whether going for the kill with his playful filth-mongering and hilarious, furious tirades against minor annoyances or holding a night together with his genial but sharp hosting skills, he can adapt to any kind of crowd and event.
​Host of hit podcasts "Rob Mulholland Has An Opinion", "Damn Daniel" and "Dead Men Talking"​
Writer for Mock The Week​
As seen being terribly edited on BBC's Comedian Rap Battles
English Comedian of the Year joint winnerBeat The Frog World Series WinnerHilarity Bites New Act of the Year WinnerFunhouse Comedy Champion of ChampionsSA Search For A Star WinnerLeicester Mercury New Comedian 3rd placeGreat Yorkshire Fringe Comedian of the Year - runner up
★★★★★"Mulholland's language and content may be a tad startling to some, but don't be fooled into assuming that he's some one-dimensional shock-comic looking to offend for notoriety's sake. His material is clever, layered and acutely observed." - Joe.co.uk​"Hilarious, fearless stand-up" - Broadway Baby​"He's mastered the art of exaggerated anger...if you like your comedians pissed off, Mulholland's your man" - Chortle
PLUS TOP QUALITY STAND UP COMEDIAN SUPPORT EVERY MONTH!
Our MC, as always, is the naturally funny and entertaining

As seen on 'Russell Howard's Good News' & 'Britain's Got Talent' Chris is a popular MC on the comedy circuit with his warm and welcoming crowd work, sharp impressions, and quick fire wit.

PLUS SUPPORT SPOTS FROM TOP QUALITY STAND UP COMEDIANS EVERY MONTH!

Our MC for the night, as always, is the naturally funny and entertaining CHRIS LUMB.

As seen on 'Russell Howard's Good News' & 'Britain's Got Talent' Chris is a popular MC on the comedy circuit with his warm and welcoming crowd work, sharp impressions, and quick fire wit.


** DISCLAIMER: THE SHOW CAN OCCASIONALLY CONTAIN BAD LANGUAGE AND TOPICS OF AN ADULT NATURE. NOT FOR THE EASILY OFFENDED**