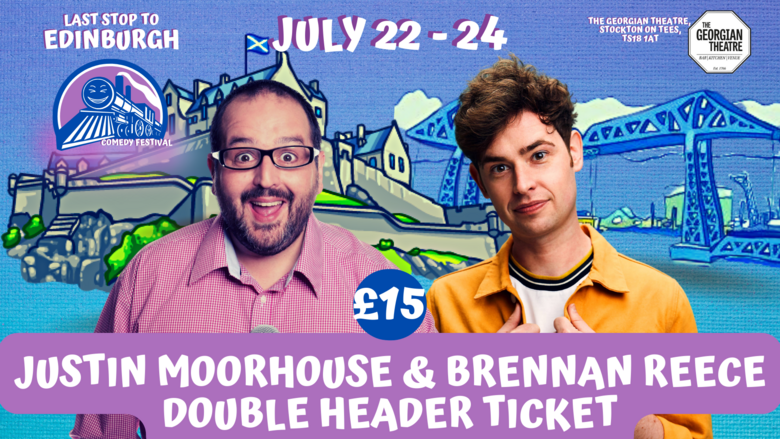 All adult shows at 'The Last Stop To Edinburgh' are Edinburgh Fringe preview/Work in Progress Shows. This is why the tickets are such a good price. Plus you get to see the shows first before these amazing acts take them up to the Fringe or decide to tour.

IT'S A DOUBLE HEADER FROM TWO OF TV'S FUNNIEST, MOST SOUGHT AFTER ACTS!!


Estimated times .... (may switch round)

Justin is back: still funny, yet middle-aged. A brand-new show that may
contain: yoga, getting older, Madonna, shoplifters, labradoodles, middle-aged cyclists, The Menopause, running, hating football fans but loving football, not drinking, funerals, 'Is tapas a rip off?', Captain Tom, Droylsden, the environment, self-improvement, ruining a sexual position, electric car charging spots used by doggers, nursery graduation, horses, Stig lookalikes, home-cooked food but not in your own home, the odd advantages of fundamental religions, the gym, shop-door etiquette. And he's got a new suit. Come, it'll be fun.

8:15PM - 9:00PM - BRENNAN REECE
Brennan Reece is a bright young rising star who burst onto the comedy scene after winning English Comedian of the Year in 2015. The following year he was nominated for the prestigious Best Newcomer Award at the Edinburgh Festival Fringe for his sell- out debut show Everglow.Brennan is becoming a regular on screens across the UK having appeared on Live at the Apollo (BBC), Comedy Central at the Comedy Store (Comedy Central), The Stand Up Sketch Show (ITV), Roast Battle (Comedy Central) and Life Lessons (BBC).He has also featured in everything from popular TV shows like The Comedy Allstars (ABC), Skins (Channel 4) to feature films such as Soulboy, a film about the Northern Soul underground scene and was also a presenter on Top Gear Extra Gear (BBC)

EARLY BIRD TICKETS ARE JUST £15 TO SEE BOTH SHOWS!
Grab them early as they will increase to £20 on July 14th.

TICKETED EVENT ONLY
LATE COMERS MAY BE REFUSED ENTRY  - NO REFUNDS CAN BE OFFERED.
LINE UPS CAN CHANGE WITH LITTLE OR NO NOTICE AT ALL

NB: SHOWS MAY CONTAIN BAD LANGUAGE AND TOPICS OF AN ADULT NATURE. IF EASILY OFFENDED THIS MAY NOT BE FOR YOU.

Brilliant little gig. Justin was spot on with his comedy and such a nice guy too. Brennan Reece was great too and so cheeky. Venue is really brilliant. Would recommend the cider and staff incredibly friendly. Cant wait to go back. Just a brilluant night. More people need to know about this place.