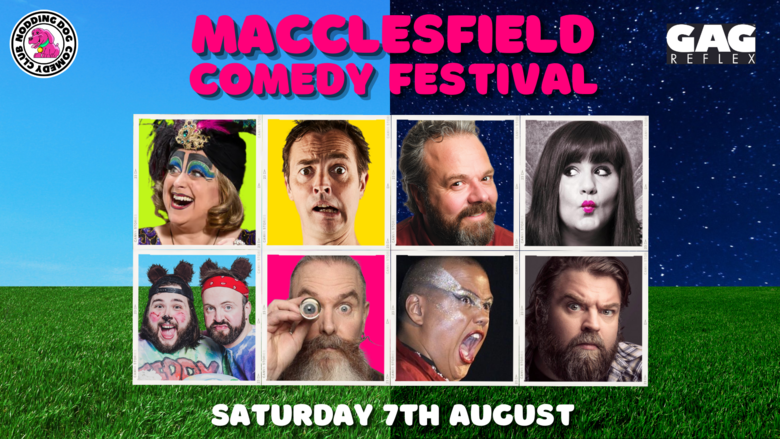 Macclesfield Comedy Festival launches on Saturday 7thAugust at Macclesfield Rugby Club. The event is in two halves so families can enjoy the daytime and at night we can turn up the comedy. Day Festival, 12pm until 5pm Character comedian, magician and sell-out Edinburgh Fringe regular Ada Campe hosts and comperes an afternoon of fun for all the family.

CBBC and Crackerjack star Nutty Noah has been terrorising the good people of Earth with his madcap family entertainment shows. A delicious blend of magic, crazy songs and all sorts of silly stuff to fill your eye sockets and your ear holes. Comedy duo Jed and Gary are going to tell you a story, well that is until a very naughty bear storms the stage! Mayhem and madness ensue in this not-so-traditional telling of the Teddy Bear’s Picnic. Full of mischief, audience participation and lots of fun to keep the whole family laughing and entertained. Martin “Bigpig” Mor has over 30 years’ experience as a professional entertainer, he has performed at events of all description: from the Hammersmith Apollo, CBBC, comedy clubs and even performing for members of the Royal Family!

Ticket prices: Family Day (2 x adult, 2 x child) £27.50. Adult Day £10. Child Day £5 (under 3s free).  Night Festival, 6pm until late At night, we turn our attention to the grownups where the entertainment is equally as impressive!

Your MC for the evening is the majestic Jonathan Mayor, one of the finest comperes in the country and is Sarah Millican’s go-to warm-up man! Opening the evening show is award-winning stand-up comedian Daisy Earl, Canadian Glenn Wool (8 Out of 10 Cats, Never Mind the Buzzcocks) is a regular at the world’s biggest festivals including Reading and Glastonbury!...and now Macclesfield!The penultimate act is four-time New Zealand Comedy Guild Awards-winner Matt Stellingwerf, our latest ‘one to watch’ tip for future stardom! Headlining the festival is Live at the Apollo, Mock The Week, Would I Lie To You? and Have I Got News For You regular Hal Cruttenden. Ticket prices: Adults £16.50. VIP £22.50 (covered seating and access to indoor bar). Away from the festival stage you can immerse yourselves in a superb street market, fill up on food from the BBQ, pick a pizza from the pizza oven, hop on a fairground ride and grab a drink from the outdoor bar. Bring your picnic blankets andgarden furniture if you wish. There will even be a joke competition with prizes for anyone that fancies themselves as a bit of budding comedian.
With some surprises to be added along the way, Macclesfield Comedy Festival is a day and night out not to be missed!


Tickets for both shows can be booked online at: https://www.jokepit.com/comedy-in/stockport/macclesfield-comedy-festival/4268

Bring picnic blankets and garden furniture to make yourselves comfortable and please dress appropriately for the weather. ONLY VIP TICKETS include seating - so please bring something if you do not want to sit directly on the grass!