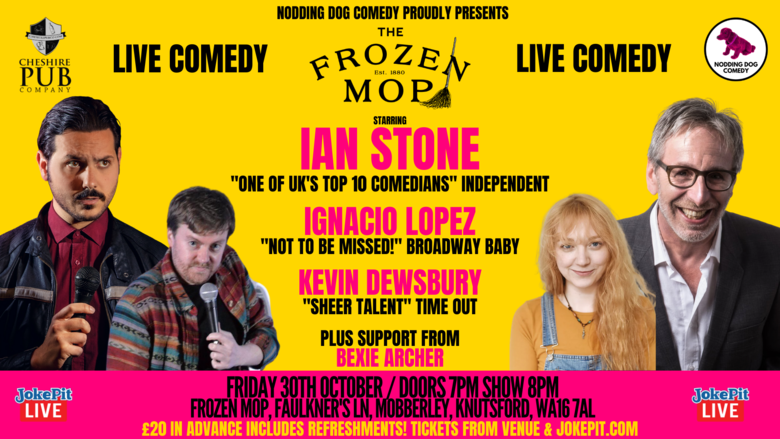 Comedy at The Frozen Mop

Comedy at The Frozen Mop launches on Friday 30th October with a scarily impressive line up of comedy talent!

IAN STONE, ranked amongst the top ten stand-ups in Britain by The Independent, is one of the most talented topical acts and comperes in the country. Edgy and provocative, with an easy-going manner and self-depreciating style, Ian is at great ease bantering with an audience. He's a member of the Comedy Store's critically acclaimed 'Cutting Edge' team. Ian also received a nomination in 2012 for the BEST SHOW at the Leicester Comedy Festival Awards.

You will recognise him from shows like Have I Got News For You, Mock The Week, Never Mind The Buzzcocks and much, much more!

IGNACIO LOPEZ has been wowing audiences internationally with his individual style and high gag-rate since 2010. Ignacio’s jokes have featured in TIME Magazine, The Poke, The Last Leg (Channel 4), Buzzfeed, Metro and more and he is fast becoming a circuit favourite!

KEVIN DEWSBURY, your MC for the evening, is a regular compere for Nodding Dog Comedy. Kevin has been a regular fixture on the U.K. comedy circuit for over 15 years, honing his craft through repetitive gigging, developing innovative festival shows, writing and acting.Kevin is a comedian who delivers every time he performs and has supported acts such as Tim Vine, Lucy Porter and Robert Llewelyn (Kryten from Red Dwarf) on UK tours as well as gigging with a stream of household names in the U.K. and overseas.

BEXIE ARCHER trained as an actor at RADA, National Youth Film Academy, National Youth Musical Theatre and The Almeida Young Friends.She graduated from The University of Salford’s Comedy Writing and Performance BA (HONS) Whilst she was there she started out on the stand-up circuit and won the Chortle Student Comedy Award 2018 and has since played venues such as The Pleasance Theatre, Warrington Parr Hall, Latitude Festival, The Bill Murray, London and The Frog and Bucket, Manchester.

Ticket includes BBQ food to be ordered upon arrival.

We ask you to follow all social distancing guidelines put in place along with advice on hand sanitising and one way systems.

Liam waterhouse was so funny best of the night by far!

Not sure the quality is getting better.

So much fun just what everyone needs right now, it’s part of my Sunday night ritual can’t wait for Heat 4 ⭐️⭐️⭐️⭐️⭐️⭐️⭐️⭐️⭐️

Robert M reviewed HEAT ONE: New Online UK Comedian of the Year 2020 which happened on 8:30pm on Sun 26th Jul 2020.
Comedy
Venue
Price
Atmosphere
Would you recommend to a friend?
Yes