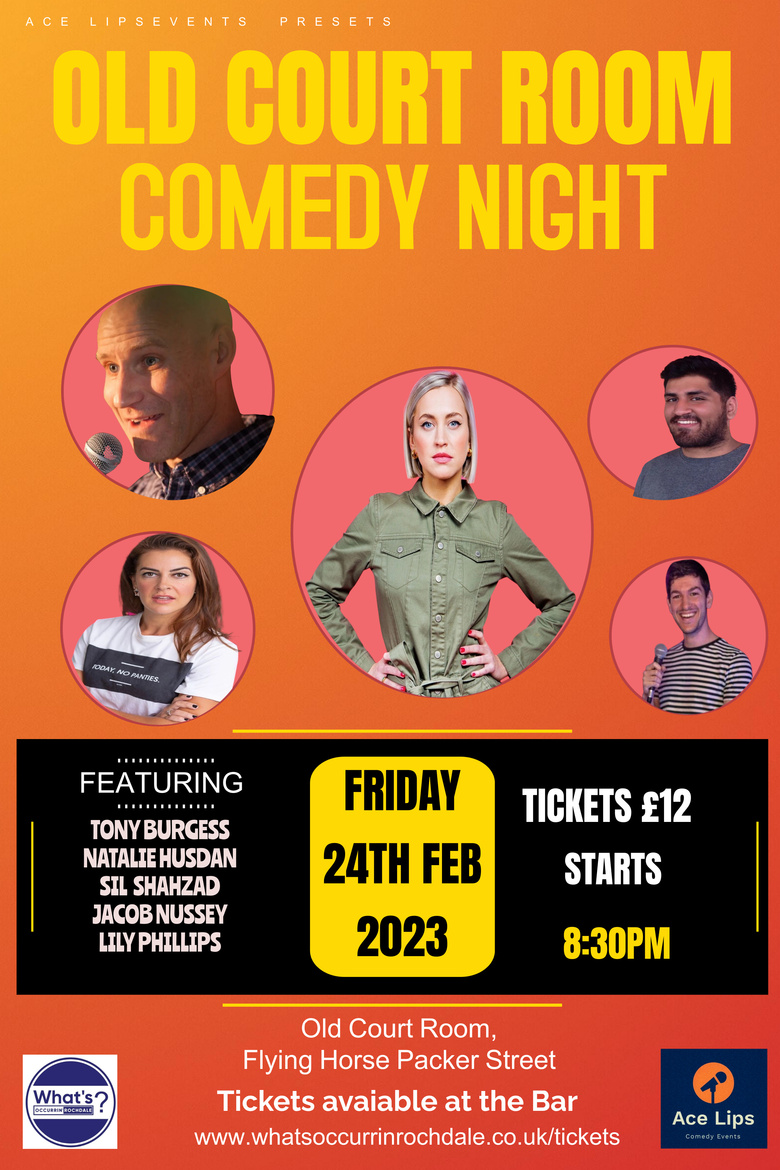 Another fantastic line up sees some of the very best on the circuit here in Rochdale.

Tony Burgess is an award winning stand-up comedian, comedy writer and actor based in Manchester.

You may recognise Tony from his role in the cult BBC3 comedy Ideal where he played DJ Troy, Moz’s vinyl obsessed brother

As well as performing stand-up all over the UK for over 25 years – he’s also written sitcoms for the BBC, plays for The Royal Exchange Theatre and written for many big name comedians such as Steve Coogan, John Bishop, and Johnny Vegas

Natalie Husdan is a super mum, one of the funniest women on the comedy circuit. We talk about companies trying to trick you into saving the planet, being a witness to a 5 car crash and the miracle of childbirth, which Nat is an expert in, from C-section to water births she has done it all.

“An instantly engaging presence on stage with a unique comedic take on life. One to watch!” WDCF

He’s seriously funny and well worth seeing in person!

Sil  Shahzad is a 25 year old up and coming stand up from the North. He combines his personal experiences with current affairs. He was shortlisted for the 2021 BBC New Comedy Awards and was shortlisted by Comedy Cellar in 2019 as one the best new Yorkshire acts within six months of starting comedy, having success at The Great Yorkshire Fringe. One to watch…

Actor, writer, comedian and TV Personality. Lily is one of the most exciting up and coming voices in comedy in the UK. She was a Runner Up at the 2019 Leicester Square New Comedian of the Year, Funny Women Finalist 2018, and was a part of prestigious Pleasance Comedy Reserve at the 2019 Edinburgh Fringe Festival. In 2021, she reached the grand final of the BBC New Comedy Awards on BBC One.

She is a series regular on The Stand Up Sketch Show and The Stand Up Sketch Show Christmas Special (ITV2), and she recently starred in a new hidden camera show for E4 Digital as a fake podcast host. Her credits also include Period Dramas (BBC3), The Joy Of Missing Out (All4), and comedy shorts for Comedy Central Online. She has also debated at the Oxford Union.

Lily is also a talented writer and in 2021, her script beat out over 1,000 applicants to be shortlisted as the final 3 in the Funny Women’s Writer’s Award, sponsored by Sky Studios.

Lily has fronted campaigns for Dominos, North Face, Bumble, and Mooncup, bringing her hilarious brand of feminist comedy to the masses.

a polished performer, exudes a life-affirming joyfulness and makes us laugh out loud ★★★★ FUNNY WOMEN

all the ingredients are there to make her one of the funniest on the circuit.

Pocket rocket in a jumpsuit ★★★★ ONE4REVIEW

Line up may change,  no refunds on the day of the events