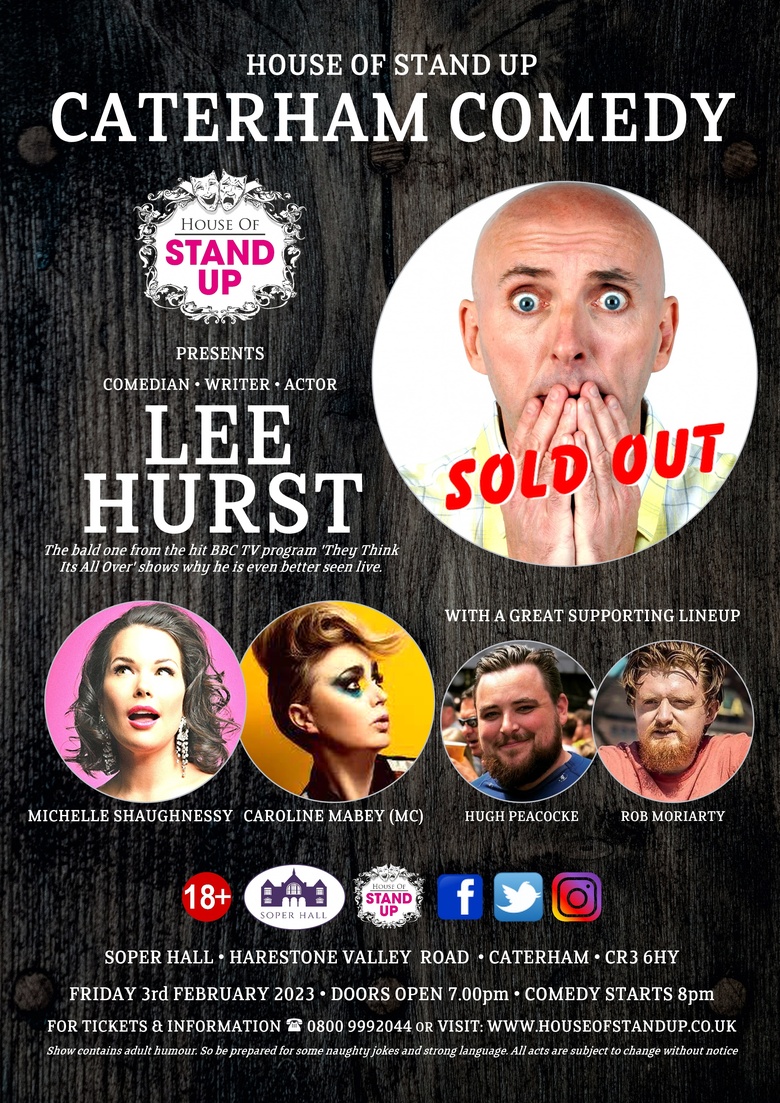 House of Stand Up presents:

HOUSE OF STAND UP PRESENTS CATERHAM COMEDY WITH LEE HURST

STARRING...
LEE HURST
After earning his spurs on the UK comedy circuit Lee Hurst became the warm-up man for Have I Got News For You? The producers needed a warm-up man for the pilot of their new comedy sports quiz, They Think It’s All Over, and Lee being as sharp as he was they decided to have him as a regular panellist. Although he had no sporting prowess and he knew next to nothing about football, he won over millions of viewers each week with his quick witted banter. Lee appeared as a regular panellist in the first five series of They Think It’s All Over leaving in 1998.

He returned for two appearances as a guest towards the end of its run for Series 17 in 2004, and for the Comic Relief 24 Hour Panel People Special on 6 March 2011. Lee’s other TV credits include presenting Shark Tank, Salvage Squad and The Warehouse, and guest appearances on That’s Showbusiness, The Stand Up Show and Have I Got News For You. He also appeared as a regular panellist on Don’t Give Up Your Day Job as well as fronting ITV’s short-lived revival of the entertainment show Saturday Night Live.

Lee was the creator of Bring Me the Head of Light Entertainment, which ran for five series on Channel 5 between 1997 and 2000. On radio, Lee has guested on The Steve Wright Show, Euromix, Two Men and a Transmitter and The Robert Elms Show. He was team captain on Hold The Front Page. He also presented Wriggling with Eels, a study of Cockney comedians for BBC Radio 4.

COMEDY STARTS - 8:00pm
DOORS OPEN - 7.00pm
House of Stand Up is a licensed premise so you must be 18+ to attend. You might be required to show proof of age Photo ID.

Show contains adult humour so be prepared for some naughty jokes and strong language. All acts are subject to change without notice.
Full details on our WEBSITE

If you'd like to receive updates, offers and the chance to win free tickets each month to our shows at Caterham Comedy you can subscribe FREE to our bi-monthly NEWSLETTER

Doors Open at 7.00pm. Comedy starts at 8:00pm. Seating is unreserved. We work on a strictly first come first served basis, we recommend customers arrive as early as possible to get the best seats. Line-up subject to change, unfortunately we are unable to provide refunds. See our FAQs on our website.