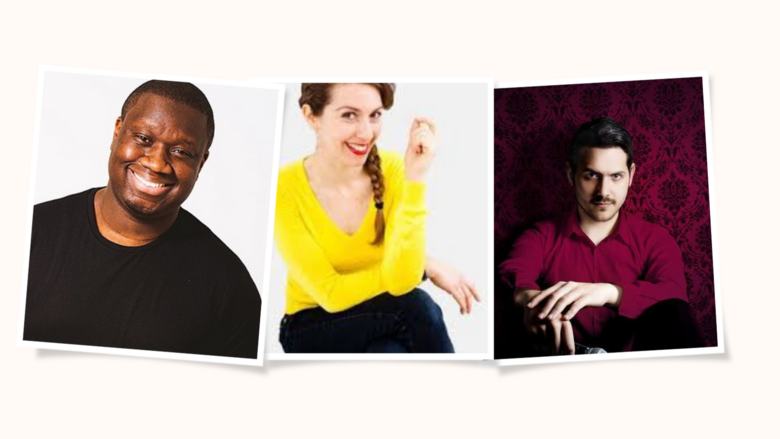 High, due to acts pulling out last minute we’ve had to cancel this event. Refunds have been issued and will take up to 7 working days to show in your account.

Funmbi Omatayo As seen on…I’m a celebrity get me out of here NOW!
The John Bishop Show
‘A charming young comic…he’s got the jokes to back up his charm. Soon, he could be playing to thousands’ -Time Out
‘Plenty of original insights and honest home-truths to enjoy’ -ChortleFunmbi Omotayo’s friendly, instantly likeable style won him the award for Best Newcomer at the Black Entertainment Comedy Awards. Gently paced stories and anecdotes are delivered warmly and confidently from this relative newcomer. Funmbi is creating a huge storm on the comedy circuit with tales of living in Hackney, his Nigerian roots and his hilarious day to day observations.
Meryl O’Rourke
Meryl has gigged extensively across the UK, Ireland, New York and Europe. Bitterly direct with a mischievous twinkle in her eye, a potty-mouthed potty-trainer. She has delighted comedy audiences, ladies nights and even hosted pop concerts (last one to 12,000 people!). Meryl performs 20-40 min sets and MCs for promoters including Up The Creek, Screaming Blue Murder, Off The Kerb, CKP, Crack, Banana, Hideaway, RIP, Funny Side…among many others, and, in December 2010, performed a storming 20 minute set at the Hammersmith Apollo, supporting Frankie Boyle as part of his national tour  A talented, and sought after, gag writer - Meryl has worked on many of the flag ship panel shows and comedy programmes for the BBC, Channel 4 and Dave. Her one woman show - Meryl O’Rourke - Bad Mother…   will be appearing at the Underbelly during the 2011 Edinburgh Comedy Festival, produced by Something For The Weekend productions An accomplished radio presenter, she also wrote and performed her own comedy series for Woman’s Hour on Radio 4, The Hysterical Method of Conception. www.bbc.co.uk/radio4/womanshour/04/2006_18_tue.shtmlMeryl was nominated for the prestigious Sony Academy Award in 2003 for Best Breakfast Show for her work co-presenting the 2CR FM Morning Crew.
Ignacio Lopez“HILARIOUS” – The Scotsman
“CHARISMATIC WITH A WASPISH CHARM” – Chortle
“PLAYFUL, BRUTAL & BLOODY FUNNY” – Moody Comedy
“UNIQUE AND HILARIOUS” – BUZZ Magazine
“FILLED THE ROOM WITH LAUGHTER. RELEVANT & PERCAPTIVE. AN ACT NOT TO BE MISSED” – Broadway Baby
★★★★★ Get Reading ★★★★ BUZZ Magazine ★★★★ Dark ChatIgnacio Lopez is a Spanish & Welsh comedian based in Cardiff. His parents are Welsh/Irish & Moroccan/Spanish, and he has a German sister; family get-togethers are like a meeting of the U.N.Ignacio has performed for the Wales football squad, opened for James Dean Bradfield of Manic Street Preachers, and hosts comedy and corporate events around the World.During the pandemic Ignacio has focused on putting more comedy content online, streaming live comedy events, running a weekly quiz, teaching people how to make Sangría, sitting on his sofa for 18 hours a day and occasionally crying in the bath.At last count (probably this morning) Ignacio’s videos have received over 20 Million views in total across Facebook, Twitter, Instagram and YouTube.