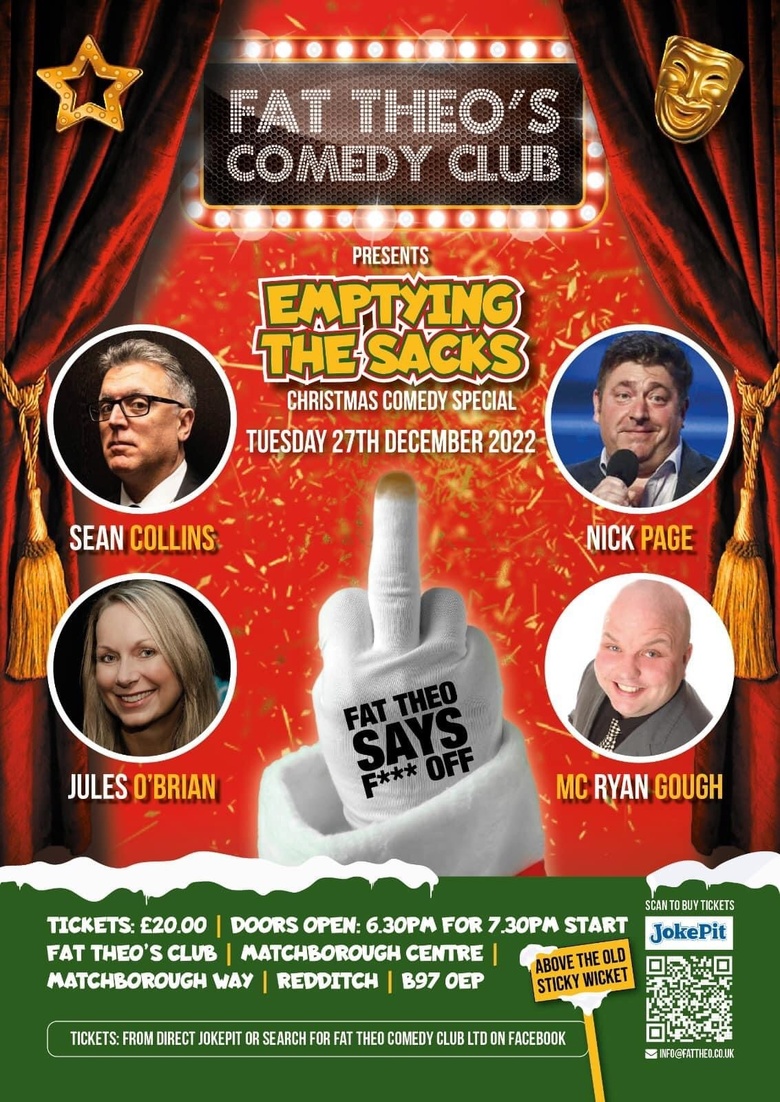 Fat Theo has excelled even his own ridiculously high standards with the calibre of this Christmas special.

Sean Collins began his comedy career in 1990 in Vancouver, Canada, after working as a child counsellor on the psychiatric unit at a local hospital. He now works largely in the UK and has appeared on the likes of McIntyre’s Roadshow and Live at the Apollo. Other TV credits include The World Stands Up Special on Comedy Central and The Comedy Store Television Show on Paramount.

Having honed his storytelling style for over 20 years, he is now a headline act and firmly established on the UK circuit. He is also no stranger to the international comedy festival circuit, having made award winning appearances at the Just For Laughs festival in Montreal and the Edinburgh Fringe.

Having married an English belle, when not on the road, he now resides in the Hampshire countryside with his family.

Nick Page is a seemingly indestructible, larger than life, award winning English comic whose life is a series of disasters somehow turning into unlikely triumphs. No gimmicks, no PowerPoint, no props and no flipcharts. Just stories and belly laughs with a master of his art.

' A winning comic personality with a distinctive style and finely tuned storytelling skills' Chortle
' A big man with a unique style.... The hit of the night' Beyond the Joke
' Rogueish, bear-like, and with a host of tales about love, life, and brushes with the law' Guardian
' funny, cathartic, and very entertaining' Broadway Baby
' a joy to behold' The Skinny

Jules O’Brian is one of Fat Theo’s personal favourite acts, her endearing personality and tales of dating as a woman slightly above 40 will have you gasping for air. Jules had recently been gigging for major clubs such as Glee.

Ryan Gough, 'Ryan is a regular host of comedy nights across the UK from Penzance to Inverness! He has also performed in Ireland, Channel Islands, Spain and India! Standing at 6 foot 5 and weighing 22 stone, Ryan is a big stage presence and takes no prisoners!'