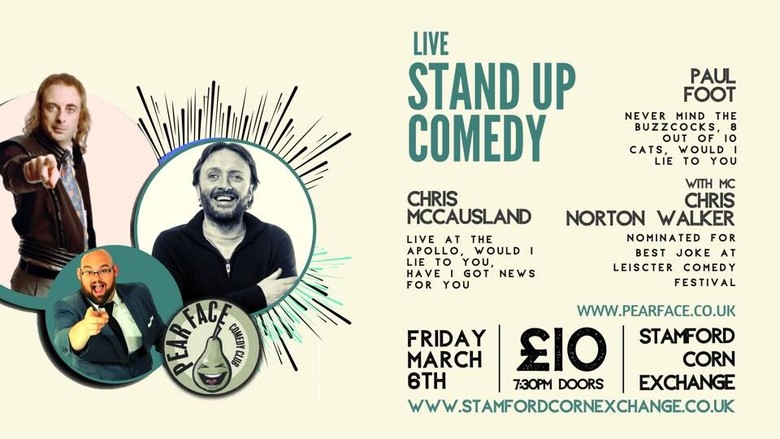 “Utter genius from Paul Foot, one of the funniest people on the planet…. crawl over broken glass to see him.” - The West Australian

“He’s a comedy whirlwind from the school of Spike Milligan….. It’s risky to call someone unique, but Foot is certainly pretty close.” -Three Weeks ★★★★★

“Utterly outlandish, but beneath layers of absurdity is Foot’s sharp eye for satire” - Time Out (Australia) ★★★★

"His jokes fit together in complex ways like equations beyond the reach of our understanding." - Time Out

Chris McCausland is a British stand-up comedian and actor from Liverpool.

Chris is blind, has been performing stand-up since 2003, and has long been firmly established at the very top of the UK’s live comedy circuit. He performs all over the country, including regularly at the world famous Comedy Store in the heart of London’s West End.

Chris has been making a name for himself performing all over the UK as well as Europe and as far as the Comedy Store in LA. "Cementing his reputation as one of the best up and coming acts around" - Funny First Mondays

Showcasing his talents as a gag writer and one of the best compares around. His show will enthral and amaze in equal measure. Don’t just take our word for it. "Chris is a massive stage presence... he doesn't warm the audience, he sets them on fire. A hearty mix of exciting crowd work and delicious material" - Honest Comedy

Parental advisory.
Disabled access is available at this venue.