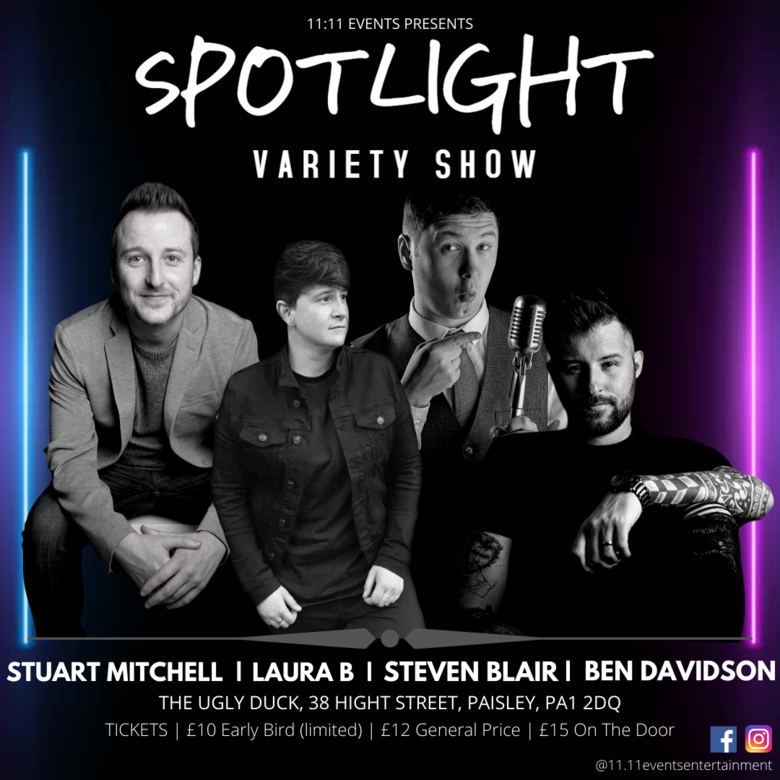 11:11 Events presents their first variety show of the year at The Ugly Duck in Paisley on Friday 28th February 2020 from 8pm.

This is sure to be a sell out show as we have headline act, Stuart Mitchell performs on his first outing with 11:11 Events. Glaswegian Comedian Stuart Mitchell, is the longest running panellist on BBC Radio Scotland's 'Breaking the News' and was part of the panel line up for the very first TV broadcast of the show on Friday 1st March 2019.

His other credits with BBC Scotland include, ‘Fred At The Stand’, 'Susan Calman’s Fringe Benefits’, ‘Comedy Underground’, ‘Sanjeev Kohil’s Big Talk’, and most recently he was heard on ’The Good The Bad & The Unexpected’.
Stuart has taken two shows to the Edinburgh Fringe and received critical acclaim and sell out audiences for both: 'Dealt a Bad Hand’ (2016) and 'Gordon Ramsay’s Karma Café’. He toured his debut show ‘Dealt A Bad Hand’ in Scotland where he achieved further critical acclaim: “Work of genius” - Daily Record ★★★★★

Next up we have  BBC's All Together Now star, Laura B, who starred on the show on Saturday night prime time TV back in March 2019, stunned the judges on the show, including Geri Halliwell, who said, "Laura, you are a breath of fresh air!". Her performance on the show has had over 1M hits on YouTube to date and looks to release her very first single. One to watch!

Another act for the evening includes an explicit performance from Ben Davidson. Ben has worked in various musical theatre productions, taking lead roles in Oliver, Grease, West Side Story, and Joseph. He has also become a regular at Pride Events, including Brighton and Gran Canaria.


Ben signed to Energise records and released ‘The Chain’ on the 12th October 2017. ‘The Chain’ was written by Thomas Lipp, Daniel Volpe and Charlie Mason (Who co-wrote the 2014 Eurovision winning song ‘Rise Like the Phoenix’ for Conchita Wurst). The single reached number #2 on the UK iTunes Vocal Album Chart and crossed over onto the overall UK iTunes Album Chart peaking at number #52. An amazing talent!

To top it all off, we have Scottish Magician of the Year 2014 & 2015, Steven Blair. Born and raised in Kilmarnock, Scotland, Steven discovered his passion for magic at a young age when he got a magic set for Christmas from his parents.  He quickly practiced and mastered the tricks in the set and started to show what he had learned to anyone who would watch. This was when Steven first discovered his passion for magic. At the age of 10, he performed for the first time in public at a talent show in Kilmarnock and won the grand prize of £5. Since then, Steven’s love for the art has only grown, quickly getting him a reputation among friends and fellow magicians as a very entertaining performer.

Steven has since developed his own unique style of performance. The magic is not about him, but it’s about the audience and creating an unforgettable magic moment for them. He has won 7 major awards that include Scottish Magician of the Yer 2014 and 2015.

Line-up is a possible subject to change, unfortunately we are unable to provide refunds. This very rarely happens at our events.