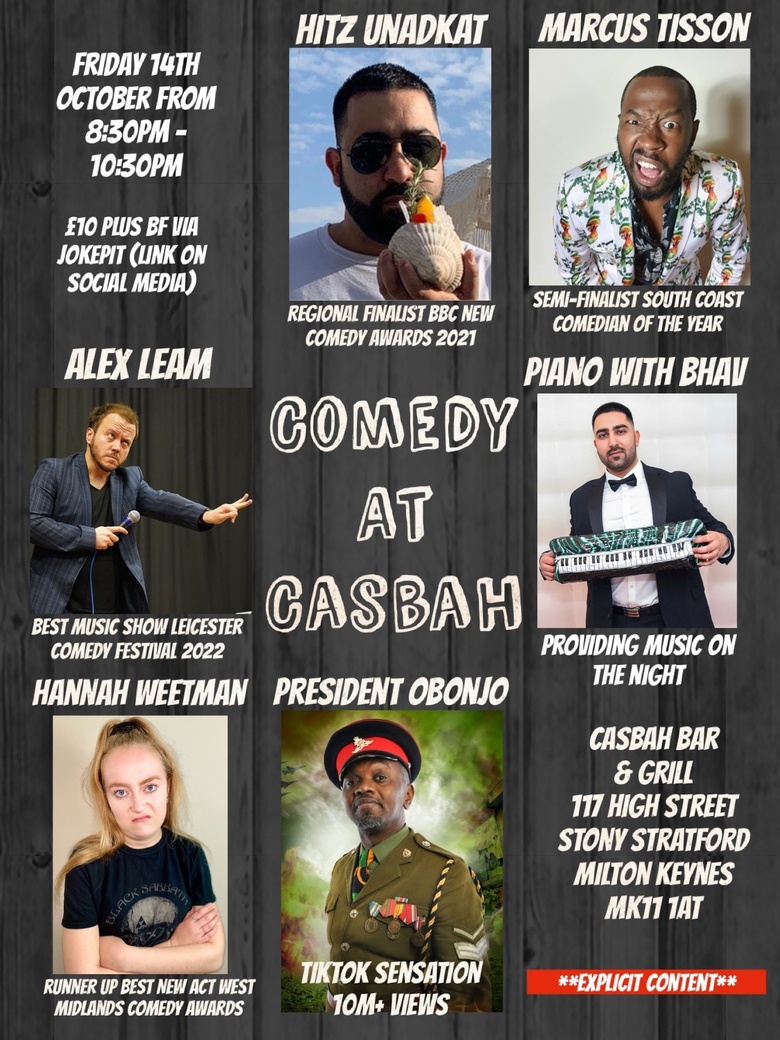 Hitz Unadkat - Hitz is from Leicester who recently moved to Milton Keynes and classes that as an upgrade. His surname is too hard to pronounce so he has to go by hitz.comedy on all social media platforms. Hitz has performed up and down the country and is making a name for himself on the comedy circuit. His stories on the ups and downs of being a British Indian will have you in stitches.
Finalist at the Nodding Dog New Online Comedian of the Year 2020
Finalist at the Enfield Comedy Club Gong Show 2020
Regional finalist at the BBC New Comedy Awards 2021
Winner of the Alestone Comedy Competition 2021.

Marcus Tisson - Marcus Tisson is a stand-up comedian, host and actor from London who has been on the comedy circuit for 6 years. He is energetic and unapologetic with his humour and has performed alongside the likes of Mo Gilligan, Judi Love, White Yardie, Axel Blake and Kane Brown.
Semi finalist at the South Coast Comedian of the Year.

Alex Leam - Before he became a stand-up, Alex Leam's first showbiz career was as a mobile DJ. He dreamt of Ibiza but ended up doing weddings and pub quizzes. He came out of DJ retirement as he needed new material. Expect to have your favourite songs ruined.
Leicester Comedy Festival Award nominee for Best Music Show 2022.
'Alex Leam is very dangerous, in a good way' (Tony Slattery).
'A winning line in self-deprecation' (Chortle.co.uk).
"This is what you want, a comedian making your face ache and tears roll from your eyes." (Ed Fringe Audience review 2022).

Hannah Weetman - Hannah is from Birmingham complete with the awful accent. She has taken part in festivals such as Edinburgh, Birmingham, Leicester, Coventry and Brighton.
Runner-up at the Best New Act category in the West Midlands Comedy Awards 2019.
Finalist at the Kung Fu Pug Comedy competition 2019.

President Obonjo - President Obonjo is an upcoming and increasingly successful stand-up comedian. As the larger-than-life, uber-confident, self-appointed, side-splitting dictator of 'Lafta Republic', President Obonjo has quietly been leading a comedy revolution to become the first President to take over the comedy industry by storm.
Macolm Hardee Awarded winner 2019.  Justice for Obonjo movement created in 2019.
TikTok star sensation with well over 10 million views.
“It’s a great comic construct, with lots of seized opportunities for playing with the clichés” (Steve Bennett, Chortle).
“There was the potential of that high-status, comedy bomb-proof kind of character that Alexis Dubus has created so successfully with Marcel Lucont.” (Ben Veneables, Londonist).
“This hour-long show was a revelation... Not at all what I was expecting.” (John Fleming).
“On the face of it, it works as a well-crafted political comedy, exposing how the world has treated Africa and left much of it to suffer corrupt governments led by the likes of Obonjo. But it's the layers of context that really make this a fascinating, bewildering and painfully funny experience.” (☆☆☆☆☆ Fringe).

Piano With Bhav - Self-taught pianist Piano With Bhav will be providing the music on the night. He has organically racked up a following of over 18k followers on Instagram with his performances. He will play covers which you wouldn’t normally hear on a piano!


Age Restrictions:
Over 18’s only

Line-up subject to change and we are unable to provide refunds. If you wish to dine in the restaurant before the event, please book your tables between 5pm and 7pm in order to finish by the time the comedy starts.

We had a brilliant night, all the comedians were very funny, my jaw was aching from laughing so much

Great atmosphere and a very chilled out event The comedians were brilliant and each one had a different style. Good variety of jokes and lots of fun

Comedy
Venue
Price
Atmosphere
Would you recommend to a friend?
No