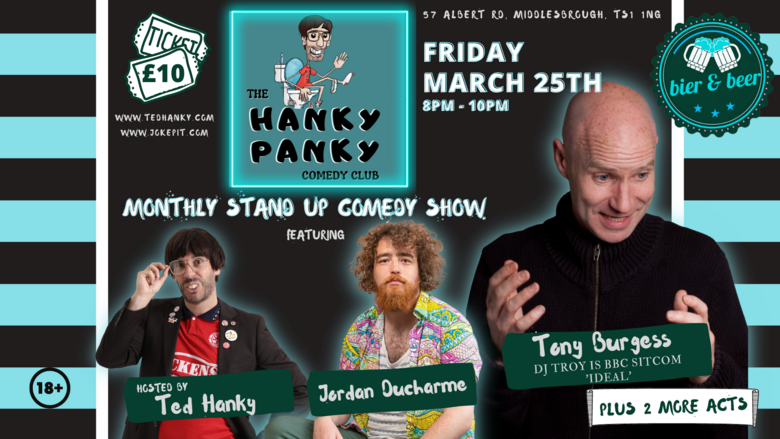 Tony Burgess is an award-winning stand-up comedian, writer and actor based in Manchester:

With his instantly engaging stage persona, Tony Burgess weaves carefully crafted gags into sometimes surreal stories about northern family life, which for over 25 years has proved a hit with crowds on the UK comedy circuit.

A successful writer, Tony has written sitcoms for BBC 1/BBC 3 and Radio 4; his plays have been staged at The Royal Exchange Studio Theatre in Manchester and he’s written jokes for many big name comedians such as Steve Coogan and John Bishop.

As an actor you may recognise Tony from his role in the Johnny Vegas led BBC3 comedy Ideal where he played DJ Troy, Moz’s crazy, vinyl obsessed brother; or maybe you’ve seen DJ Troy’s latest reincarnation in the recent webseries DJ Troy: The Siege Of Troy.

Jordan is a Canadian born comedian on the rise. Beginning in Vancouver, Jordan hit the ground running and has never looked back. He adopted the witty and gritty style that made him fall in love with comedy as a teenager, and with his clever writing and blunt delivery, has matured into a competent powerhouse on stage.